Last March, as the Coronavirus crisis was first beginning to unfold, the Federal Reserve slashed interest rates to record-low levels. Simultaneously, the Federal Government increased its already high spending through massive stimulus packages intended to reduce the pandemic’s impact on the economy—adding trillions to the national debt. Over the past year, the national debt soared from $23.2 trillion to $27.7 trillion. As of April 2021, the national debt has already surpassed $28.1 trillion, and it is certainly not going down any time soon.

Despite the ballooning deficit, the total interest that the government pays on its debt actually declined in 2020. In 2019, the Federal Government spent $879.36 billion paying for the interest on the national debt. In 2020, interest payment expenditures decreased to $841.07 billion. The national debt clearly did not decline over that period, but interest rates were lower, leading to a lower interest expense overall. However, rates cannot remain at their current level forever, and will eventually have to increase.

If aggregate interest rates rise by 1% (as they undoubtedly will) above their current level, the amount that the government spends on interest will increase to around $1.23 trillion—give or take a few billion. This number was calculated using the total national debt as of the last quarter of 2020, as that is the most current official figure that has been published by the Treasury Department on a quarterly basis. Given that the deficit has already grown since then, the actual number will likely be higher. Using the current national debt in the calculation, the total interest expense for a single year would be closer to $1.25 trillion under the aforementioned scenario.

The rising national debt, and the interest it carries, have far-reaching economic consequences that will have to be dealt with sooner or later. In order to acquire the funds to even service the debt, the government has two options—print even more money or raise taxes. Neither option is particularly beneficial for the economy.

Taxation disincentivizes consumption and investment and is particularly detrimental for a recovering economy. Printing more money will only increase the already mounting inflationary pressure, and it really does not solve the underlying problem. The national debt will only continue to increase—the ink has barely dried on the last $1.9 trillion spending bill and there is already another $2 trillion infrastructure bill in the works—and the amount the government (and ultimately the taxpayer) spends on interest will keep rising with it, especially as interest rates return to more normal levels. 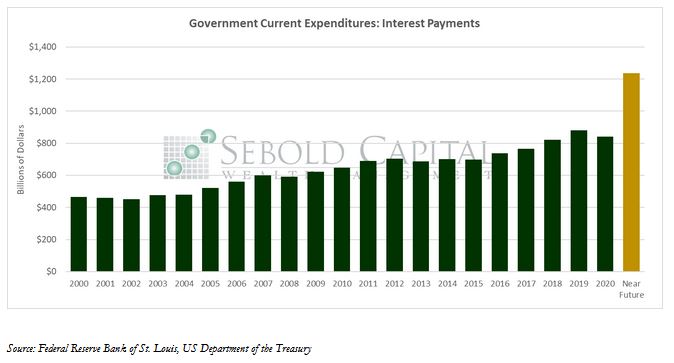