Last week, initial claims saw another sharp decline, falling by 18.9% to 184,000. This is the second time in a few weeks in which the figure has reached not only a pandemic-low, but also its lowest point in more than a decade. Continued claims, however, saw a slight uptick in the last week of November, but it was preceded by a fairly substantial 4.9% decline the previous week. The figure currently stands at 1.99 million, up from a pandemic-low of 1.95 million.

Initial unemployment claims fell to their lowest level since September 1969 during the first week of December. The figure, which serves as a proxy for layoffs and a timely indicator for labor market conditions, is known for being quite volatile, so large swings one way or another are not rare. However, the four-week moving average, which smooths out some of that volatility, fell to 218,750. That is its lowest point since March 2020 and right in line with pre-pandemic levels, seemingly indicating that layoffs have essentially normalized. Unfortunately, there continues to be a labor shortage has led to an exceedingly tight labor market. The recent JOLTs report showed the gap between vacancies and hires in October was the widest since we started keeping track of it, and the number of available jobs far outnumber the unemployment level. Therefore, it is not surprising that businesses are reluctant to lay off whatever workers they currently have—they may not get them back if they do. 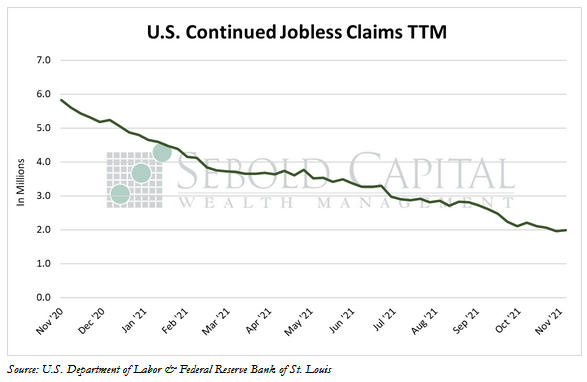