On December 15, the Federal Reserve made one of the most consequential announcements of the year regarding monetary policy. Not least of all because they have finally stopped using the term “transitory” to refer to inflation, but also because of the change they made to their strategy to fight this very-much-not-transitory inflation. The Fed now intends to double the pace at which they taper their gargantuan asset purchase program, which previously hovered at $120 billion per month. Fed Chairman Powell announced they shrink the program by $30 billion a month instead of the $15 billion monthly reduction that was originally planned. This would bring the program to an end by March instead of June, which allow the central bank to increase rates sooner. The Fed has previously stated that it will not raise interest rates until it has fully ended its asset purchase program, as it makes no sense to simultaneously tighten and loosen monetary policy.

It is important to point out that just because the Fed is done purchasing assets, that does not necessarily mean it will immediately raise rates. Given the extent to which prices have increased and the sorts of inflationary pressures that we are seeing, however, it would be irresponsible to leave rates at 0% for much longer. Fed officials have projected that they will raise rates three times next year.  If we assume it is no more than 25 basis points per raise, we would still be lower than 1% on the year. It is unlikely that this will have a meaningful impact on inflation, if it continues at the same pace that we have seen over the past six months.

While the Fed is no longer referring to inflation as “transitory,” they remain insistent that it will ease next year. By our calculations, that seems rather unlikely. Owners’ equivalent rent, the single largest component of the CPI, has yet to catch up the reality of housing costs. Producer prices have increased at a faster pace than consumer prices, and businesses have only started to pass on those costs to the consumer fairly recently. Prices will continue to rise because there will continue to be too much money chasing too few goods and services. The Fed is merely planning to stop expanding its gargantuan balance sheet, reducing its size is not even on the table at this point. Add to that the fact that they will continue to pursue a return to full employment (their definition of full employment remains unclear) and it becomes clear that monetary policy will remain relatively loose for quite some time. 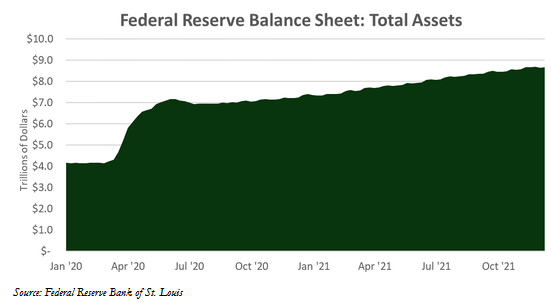