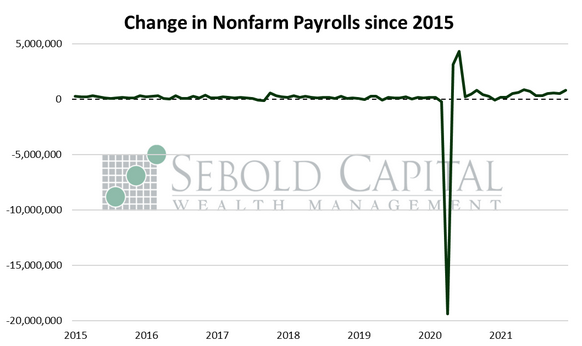 The number of payrolls in the private sector rose for the twelfth consecutive month as the labor market seemingly strengthened in December. Payrolls had their largest increase since May, showing robust gains from the manufacturing industry and rapid growth in the services sector. Leisure and hospitality saw the largest gain last month, with payrolls increasing by 1.7%. That was followed by administrative and support services and construction, which posted gains of 0.9% and 0.8% respectively. The smallest gains occurred in sectors like mining, management, education, and financial activities; but nevertheless, each of those industries managed to post a 0.3% gain as well. December’s robust payroll gains brought the fourth quarter average to 624,982, surpassing the 514,373 average for the year. The average growth rate also increased in Q4, 0.50% compared to 0.42% for the year. However, the economy is still missing about 3.53 million jobs when compared to pre-pandemic levels. The bulk of the missing jobs are in the services sector, which is missing 3.44 million jobs or about 3.2% of its pre-pandemic level. The manufacturing industry has fared much better by comparison, as it is only short about 0.44%, or 93,000, of its payrolls.

The report emphasized the fact that its data did not fully reflect the supposed impact of the Omicron variant on the labor market. However, if Delta’s late-summer surge is at all indicative of how firms react to rising Covid cases—in the absence of government intervention—Omicron’s impact is unlikely to be significant. Private payrolls continued to post moderate-to-strong gains even as cases kept climbing, indicating that firms will likely continue hiring throughout the winter. The Labor Department’s nonfarm payrolls report may seem to contradict that assertion—the report did show job growth slowing down as Delta became prevalent. However, that was likely due to issues with the report’s seasonal adjustments, as the substantial upward revisions that came afterwards would seem to point out. 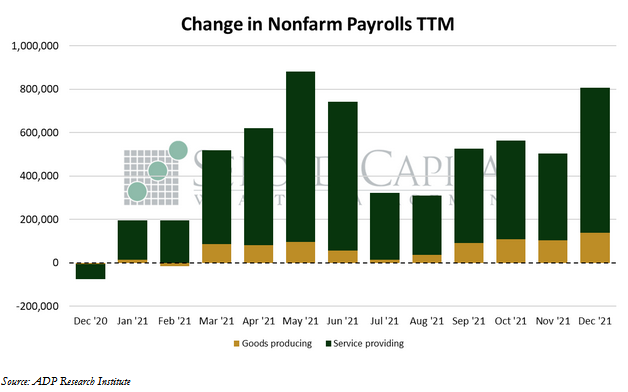