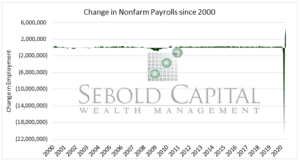 Non-farm payrolls give an overview of the overall employment outlook of the US economy; non-farm payrolls do not include those employed in agriculture because of the seasonal nature of their work. This report obtains these numbers from 142,000 businesses and government agencies to track the new jobs added in non-farming sectors of the economy.

Throughout the month of June, total non-farm payroll employment rose by 4.8 million, and the unemployment rate fell to 11.1%. These numbers come after the economy experienced one of the worst months of job cuts ever recorded in US history. Combined with the job losses in March, the layoffs that occurred in April have practically wiped out all the jobs gained over the last decade in the US. It is estimated that nearly 22.8 million jobs have been added to the US economy since March 2010, and approximately 21.8 million of them were cut during March or April of this year.

On the bright side, this past month the economy bounced back significantly as job openings increased by 8.1% and layoffs decreased by 76.7% from the month of May. The leisure and hospitality sector contributed most to the overall increase in employment in June (+2,100,000) and accounted for over 40 percent of the rise in total non-farm employment. Other areas that experienced a significant increase in employment during June were retail trade (+740,000), education and health services (+568,000), and manufacturing employment (+356,000). It should be noted that that revisions will be made during this month as there are normally two revisions that take place after the initial release of data. This provides more accurate numbers and data as predictions for next month’s numbers are formulated.

While many economists believe that these numbers do not capture the full scale of job loses because many workers are still being classified as employed but are out of work, the numbers for this month have shown that the job market is steadily on its way to recovery. With over 7 million jobs being added back in the last two months, the job market has been improving faster than predictions had shown. Specifically citing the month of June, the total non-farm payrolls registered 1.9 million jobs higher than the predicted value which was only about 2.9 million. This significant increase stems from the hiring/rehiring of employees nationwide as many businesses fully reopen and respond to the increase in demand during this post lockdown period. Noting that summer months are in full swing, consumer spending is on the rise and businesses are struggling to keep up with consumer demands. Many businesses have adapted new means of operations or are seeking to hire more personnel in order to operate successfully. As economists look ahead, it is predicted that total nonfarm payroll employment will continue to rise as businesses look to expand with improving economic conditions. While economists predict that it may take years for the economy to return to normal, the job market is expected to slowly rise over the coming months assuming another outbreak of the Coronavirus does not occur or further disrupt economic activity. 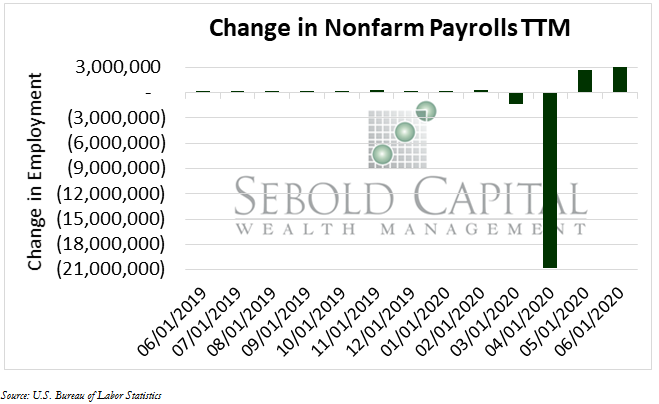