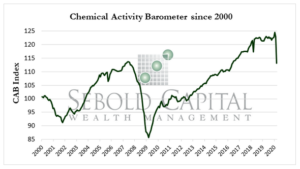 The Chemical Activity Barometer (CAB) is a composite index, which is comprised of indicators drawn from a range of chemicals and sectors, including chlorine, alkalis, pigments, plastic resins, and other selected basic industrial chemicals. It has been shown to provide a lead of 2 to 14 months, with an average lead of 8 months at cycle peaks as determined by the National Bureau of Economic Research.

All four categories that make up the CAB—production, equities, prices, and others—all decreased this month. Trends in construction-related resins, pigments, and related performance chemistry were generally negative. Plastic resins used in packaging and for consumer and institutional applications were generally negative. Performance chemistry was negative, and U.S. exports were weak. A recession is, generally, believed to be occurring when the barometer declines for three consecutive months, and as of March, the CAB has declined for two straight months. This CAB report is signaling recessionary conditions in the U.S. as the CAB will likely continue to fall in April. 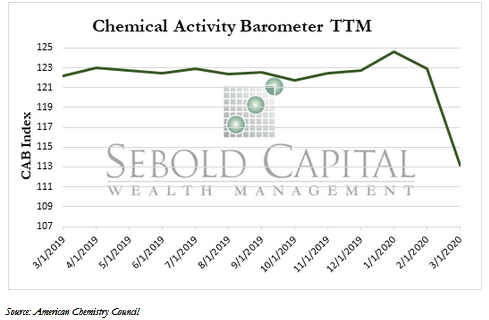