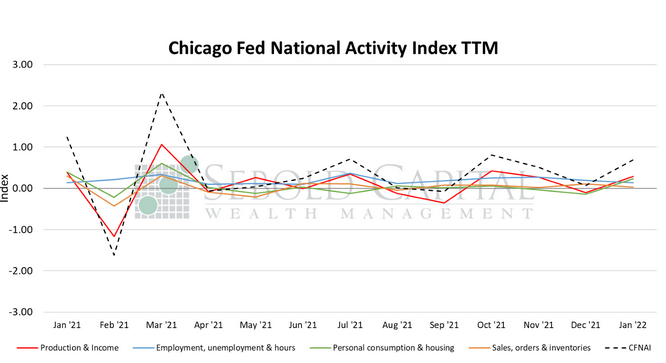 The Chicago Fed National Activity Index (CFNAI) is an indicator designed to gauge overall economic activity and related inflationary pressure. It is a weighted average of 85 existing monthly indicators of national economic activity that are divided into four broad categories of data: production & income; employment, unemployment, & hours; personal consumption & housing; and sales, orders, & inventories. The index is constructed to have an average value of zero and a standard deviation of one. Since economic activity tends toward trend growth rate over time, a positive index reading corresponds to growth above trend, and a negative index reading corresponds to growth below trend.

Economic activity seemingly regained some momentum last month after what appeared to be the beginning of a slowdown in December. That month’s -0.15 print was upwardly revised to 0.07, putting the index on a four-month positive trend. While two of the broad categories declined in relation to the previous month, all four of them ended up making positive contributions to January’s print. The momentum in economic activity was driven primarily by production, consumption, and housing activity, with industrial production particularly improving over the month. Employment conditions worsened slightly in January compared to December, but remained positive overall. Sales, orders, and inventories declined for the fourth consecutive month as inflation and supply chain constraints continue to pose challenges for firms and consumers alike. Despite the uncertainty surrounding economic growth at this time, both the CFNAI’s three-month moving average and the diffusion index suggest that the economy continues to grow above trend, although expectations of growth remain moderate for the year. 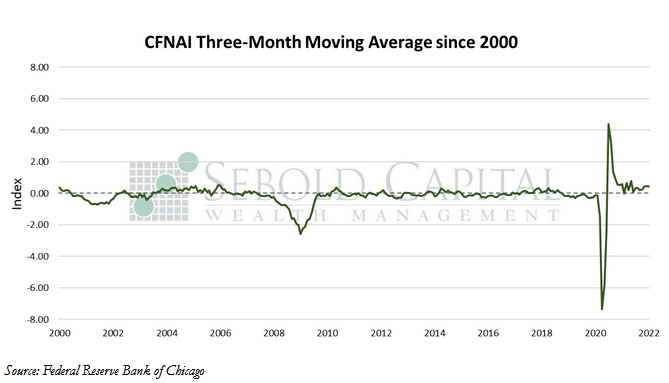