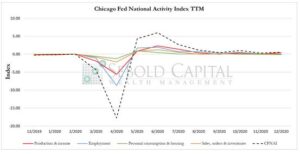 In December, The CFNAI increased by 0.21 points to a level of 0.52. The index’s three-month moving average increased by 0.02 points to 0.61. Last month’s net increase in the CFNAI was entirely driven by a 0.31-point surge in production-related indicators.  Three out of the four broad categories of indicators that make up the index made positive contributions last month, but employment and sales-related indicators declined from November. The subindex measuring personal consumption had an overall negative impact in December, dropping to -0.09 and presenting a negative value for the second month in a row.

Last month’s CFNAI level indicates that the economy continues to expand at an above-average rate, compared to historical levels. Most of this expansion came from production-related activities. Industrial production had a particularly strong month, growing 1.6% in December. However, indicators measuring sales, orders, and inventories declined from 0.09 to 0.05, but remain positive overall. Employment declined slightly last month as a result of the new restrictions that were imposed to contain the spread of COVID-19, with service-providing industries being the most impacted. Personal consumption and housing took the biggest hit, and the negative index value indicates below–average growth. The CFNAI index has remained positive since May, indicating economic expansion. However, the index has been approaching a value of zero for the last few months, indicating that economic growth in starting to normalize. 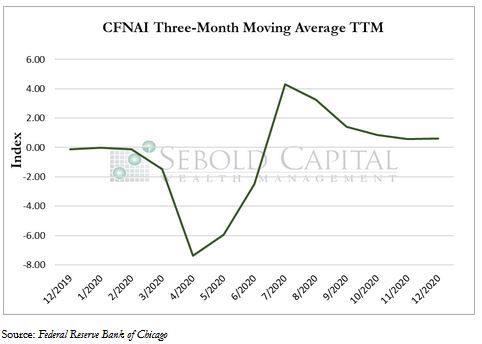