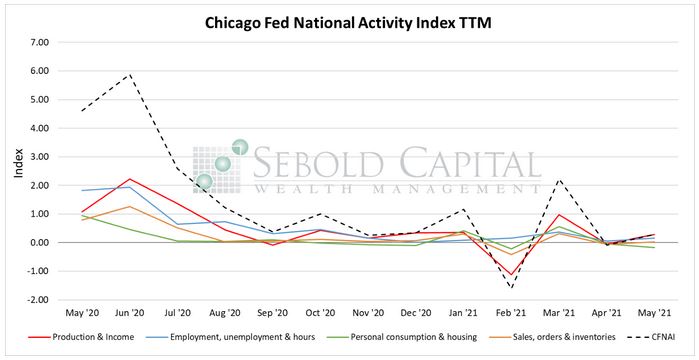 In May, the CFNAI increased by 0.38 points to an index level of 0.29. The index’s three-month moving average rose by 0.64 points to a reading of 0.81. Three out of the four broad indicators that make up the index advanced last month. Production and income indicators improved by 0.34 points to a level of 0.29. The sub-index that measures employment conditions rose by 0.10 points to 0.16. Sales, orders, and inventories gained 0.08 points last month and currently sit at a level of 0.02. The only indicator that declined was personal consumption and housing, with the corresponding sub-index falling by 0.14 points to -0.18.

Last month, the CFNAI improved after falling into negative territory in April. The index had been downwardly revised, indicating that the economy actually grew at a below-average trend in April. However, economic growth picked back up in May, led primarily by improvements in production-related indicators. Despite the seemingly improving economic conditions, personal consumption indicators broadly deteriorated and had a negative impact on the overall index. Sales and orders indicators, although slightly higher last month, barely remain in positive territory. Nonetheless, the three-month moving average, which provides a more consistent picture of economic growth, continues to signal that the economy is in expansion territory since it remains above -0.70. 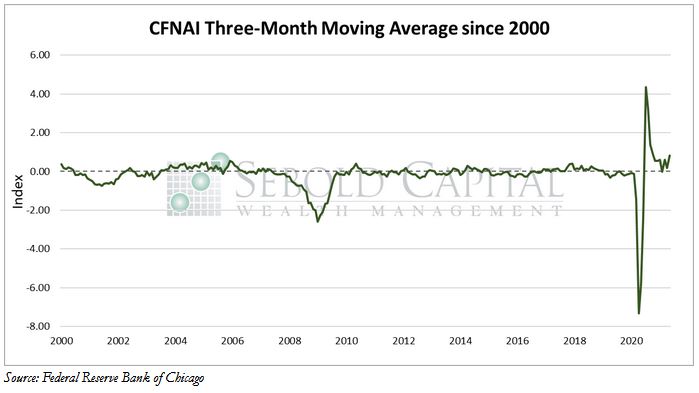