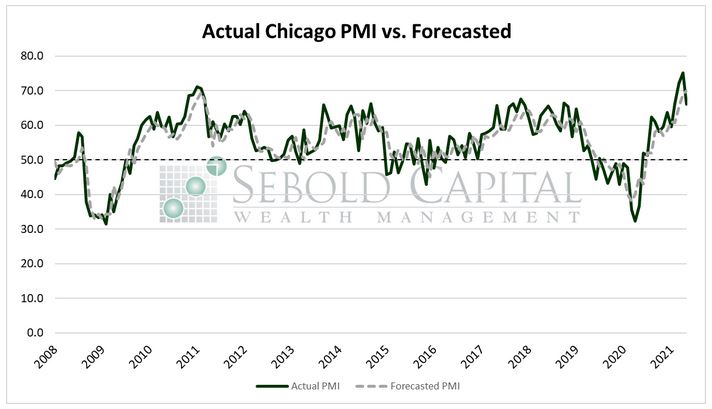 Chicago PMI is a composite index of business conditions in the Chicago area. Data from Chicagoland firms is collected by the financial news firm, Market News International, through manufacturing and non-manufacturing surveys sent to businesses. A drop in demand for goods is reflected in businesses’ responses in the Chicago PMI survey, which, is in turn, reflected in a lower index reading. Readings above 50 indicate an expanding business environment, while readings below 50 indicate a contractionary environment.

In June, the Chicago PMI declined by 12.1% to a reading of 66.1. This month’s reading under performed its forecast by 3.9 points after three months of beating market expectations. However, the index has increased by 29.5 points, or 81%, over the past twelve months, highlighting the extent to which the economy has recovered.

Economic activity in the Chicago area rose at a slower pace this month, falling from a 48-year high to the lowest level since February. The economy, however, is still firmly in expansion territory as the barometer remains well-above 50. Prices continued their alarming rise, soaring to their highest level since late 1979. Manufacturing activity also continued to rise, although it no longer seems to be accelerating. This decline in Chicago’s business barometer brings it back into line with the ISM manufacturing index, which has a nationwide scope, after a few months of increased volatility. The Chicago PMI is particularly sensitive to orders for Boeing aircrafts, which have rebounded in the past couple of months and have contributed to the index’s volatility. Order backlogs declined in June and supplier deliveries picked up, which is a positive sign given the number of supply-chain disruptions that continue to plague nearly every industry. The ISM manufacturing and services reports, which will be released in the coming days, will provide more clarity about the issues that businesses are facing at a nationwide level, such as rising prices, labor shortages, and supply chain disruptions. 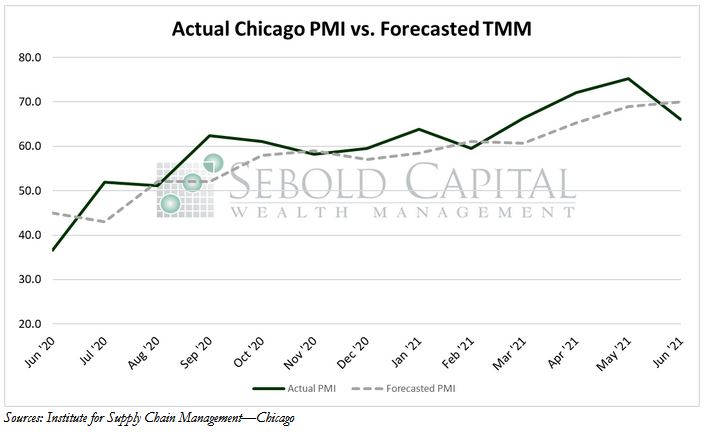