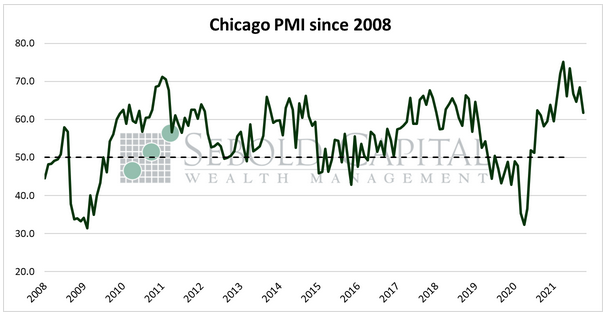 Chicago PMI is a composite index of business conditions in the Chicago area. Data from Chicagoland firms is collected by the financial news firm, Market News International, through manufacturing and non-manufacturing surveys sent to businesses. A drop in demand for goods is reflected in businesses’ responses in the Chicago PMI survey, which, is in turn, reflected in a lower index reading. Readings above 50 points indicate an expanding business environment, while readings below 50 indicate a contractionary environment.

In November, the Chicago PMI declined by 6.6 points to a level of 61.8—the lowest reading since February. The figure sharply missed market expectations, which hovered at 67.0. However, the index remains firmly in expansion territory as it is still above 50 points.

Economic activity in the Chicago area moderated last month, driven by a slowdown in new orders. Inventories rose to their highest level since late 2018 as firms begin to stockpile in anticipation of further supply chain disruptions and continuing shortages. Order backlogs declined below their twelve-month average; however, this was not due to more orders being fulfilled but rather less orders being placed in the first place. Multiple respondents to the survey reported supplier deliveries in November to be the slowest ever, further highlighting the state of the supply chain. Unsurprisingly, prices paid remained high, just shy of the multi-decade high they reached last month. Firms are continuing to pass these higher costs to consumers, with 78.4% of respondents to the survey’s special question regarding that topic stating that they were at least partially passing those costs onwards. 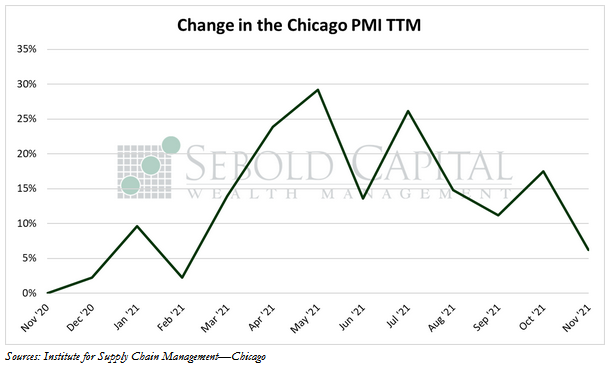