Chicago PMI is a composite index of business conditions in the Chicago area. Data from Chicagoland firms is collected by the financial news firm, Market News International, through manufacturing and non-manufacturing surveys sent to businesses. A drop in demand for goods is reflected in businesses’ responses in the Chicago PMI survey, which, is in turn, reflected in a lower index reading. Readings above 50 indicate an expanding business environment, while readings below 50 indicate a contractionary environment.

In June of 2020, the Chicago PMI increased to 36.6 from the previous month’s level of 32.3. The TTM Chicago PMI is currently down 6.3 points, or 14.7%, from 42.9 at the end of January. When comparing this month’s statistic to that of June 2019, the Chicago PMI has observed a 13.1-point decrease which is equivalent to a decline of 26.4%. It is also important to note that over the last six months the Forecasted PMI has been off by an average of 5.92 points.

Readings of the Chicago PMI within the last few months have shown evidence of a notable decrease in economic activity. Because these readings have all registered below 50 since August of 2019, it indicates that the economy is contracting. Specifically citing levels from the last three months, the Chicago PMI has not observed readings this low since early 2009. However, today’s economy proves to show signs of life and recovery as the Chicago PMI increased 13.3% from last month. While it increased significantly less than the forecasted value of 45, it is an indicator that economic activity is very slowly heading in the right direction.

Production experienced the largest monthly gain this month as it jumped by 10.1 points and strengthened demand by 33.8%. Despite this significant increase in demand, its quarterly figure fell to its lowest level in 40 years. Levels of demand provide valuable insight into consumption activity in the economy and the increase this month displays evidence towards a slow incline in GDP. On the other hand, two inputs of Chicago PMI that decreased this past month were employment and supplier deliveries. Employment fell by another 5.1 points in June and supplier deliveries faltered 10.2%. Both numbers depict evidence of contraction but at slower rates than the last few months. With the Chicago PMI beginning to rise, it is expected that manufacturing and non-manufacturing levels in the US will continue to rise, granted a second wave of the Covid-19 virus does not interfere with economic recovery. 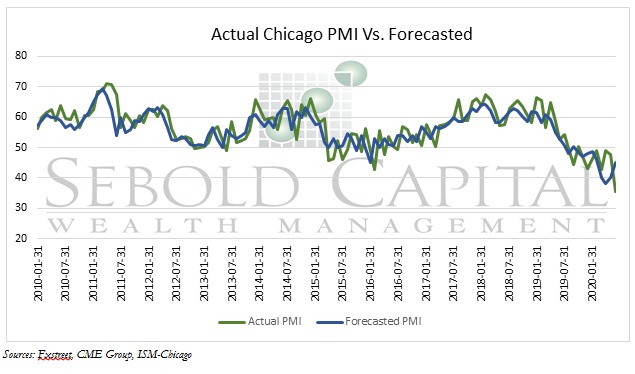