In September, the CPI rose by 0.4% to a level of 274.1. Year-over-year consumer price inflation rose to 5.4%, beating market estimates by 0.1%. Core CPI—which excludes prices for food and energy and is therefore considered to be less volatile—rose by 0.2% to a level of 280.0, while core inflation remained at 4.0%.

Last month, consumer prices continued to advance, further casting doubt on the argument that inflation is merely transitory. Consumer inflation is now the highest it has been in well over a decade, and it shows little sign that it will ease anytime soon. Energy prices were once again the main driver of the index, increasing by 1.3% from the previous month. In particular, fuel prices rose by 3.1%, the largest advance since March. Food and beverage also had a notable monthly gain of 0.9%. Inflation for these items rose from 3.7% to 4.5%—the highest since 2011. Transportation costs had a slightly smaller gain, rising by 0.3% from August. Used car prices declined for the second consecutive month, although they remain 24.4% above last year’s levels. However, the average price of a new vehicle still increased by 1.3% last month, offsetting the 0.7% decline in used car prices.

While August’s CPI release may have given the impression that inflation was beginning to ease, September’s report dispelled that notion as inflation accelerated once again. Persistent supply chain disruptions, worsened by unusually high levels of consumer demand, continue to drive prices higher. Companies are now starting to pass their own increased input costs onto consumers, something they had been hesitant to do just a few months ago, when more people bought into the “transitory” narrative. Consumer inflation expectations continue to rise, increasing to 4.2% in September. These expectations can easily become self-fulfilling, as consumers are more likely to demand higher wages and accept higher prices if they believe inflation will remain elevated—which ironically only adds fuel to the inflationary fire.

It is important to remember that the CPI does not capture the full extent of inflation in the economy, or even in consumer prices for that matter—and this is largely by design. However, the fact that the index has still managed to surge by 5.4% on a year-over-year basis despite all its dubious quality adjustments and attempts to mimic substitution should be alarming. If this year’s data is annualized, CPI inflation is on track to hit 6.3% for 2021, while core inflation would be 5.6%. Given that the Federal Reserve’s timeline to raise interest rates remains uncertain, and that the government keeps proposing new ways to spend trillions of dollars, the inflationary pressures that plague the economy are likely just beginning. 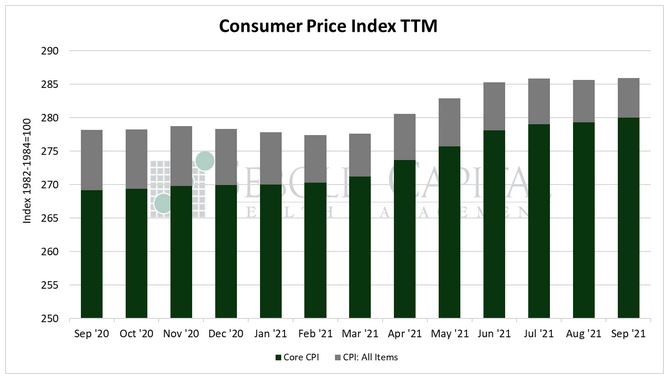 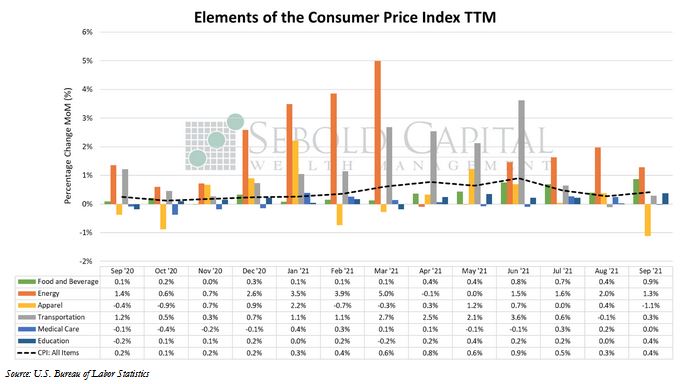