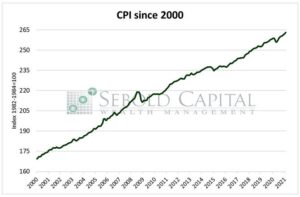 Last month, the CPI increased by 0.4% to a level of 263.2. Core CPI, which excludes prices for food and energy—and is therefore considered to be less volatile—increased by 0.10% to a level of 270.3. Aside from apparel, all of the index’s components rose in price last month. Energy prices put the most upward pressure on the index for the third consecutive month, rising by 3.9%. They were followed by transportation prices, which increased by 1.1%. Medical care, food and beverage, and education had more marginal price increases—0.3%, 0.1%, and 0.17% respectively.

Prices for consumer goods and services continued to increase in February at the fastest pace in six months. The annual rate of inflation for all prices (as measured by the CPI) currently sits at 1.7%, while the annual rate of core inflation is reported at 1.3%. Fuel prices continued their recent trend and surged by 6.4%–and are now higher than they were a year ago. Production cutbacks by major oil producers are mainly to blame for the higher fuel prices. After months of downplaying inflation fears, the Federal Reserve finally admitted that inflationary pressure might increase in the coming months. This is hardly a surprise, as the $1.9 trillion package that is about to be passed will only further expand the money supply. However, the Fed indicated they have no intention to raise interest rates anytime soon, meaning that they will likely let inflation run hotter than normal as a buffer for Pandemic relief.