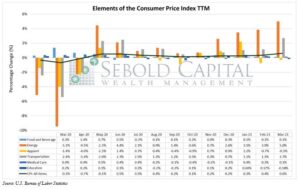 In March, the CPI increased by 0.6% to a level of 264.8—the largest single-month jump since mid-2012. Annualized inflation currently sits at 2.6%, well above pre-pandemic levels. Core CPI, which excludes prices for food and energy—and is therefore considered to be less volatile—rose by 0.3% to a level of 271.2 and has increased by 1.65% over the past year.

Last month, rising energy costs continued to put upward pressure on consumer prices, rising by 5.0% to an index level of 229.9. The index has soared by 13.2% over the last twelve months and currently sits at its highest point since 2014. Transportations costs also surged in March, rising by 2.7% from the previous month. Prices for food and beverages rose modestly by 0.1%, also contributing to last month’s index. However, costs for education and apparel declined last month, but not nearly enough to offset rising prices for other categories. After a year of massive public spending and an unprecedented expansion of the money supply, March’s CPI shows that inflationary pressure is beginning to build up for consumer prices. Given that the Fed has stated that it intends to keep interest rates low, inflation is likely to continue rising essentially unchecked. Rising consumer demand as the economy recovers will also continue to drive the surge in consumer prices over the near term.