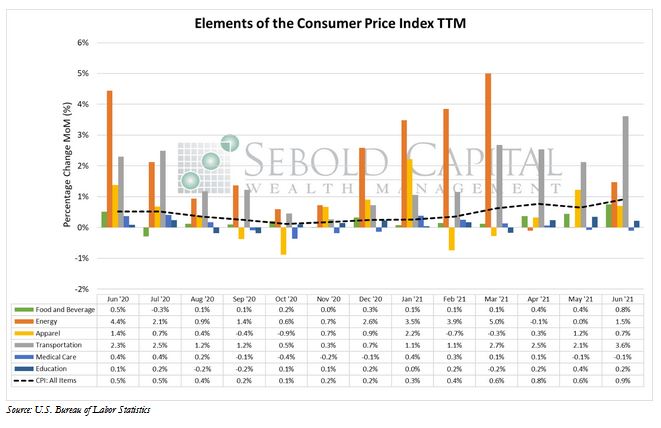 Last month, consumer prices advanced at the fastest rate since mid-2008 and further casting doubt on the “it’s transitory” narrative. Transportation costs surged by 3.6%, energy prices increased by 1.5%, food and beverage costs rose by 0.8%, and apparel prices increased by 0.7%. Only prices for medical care declined last month, falling by a mere 0.1%. Many continue to point to supply-side issues as the main source of the upward pressure on prices; that is certainly true to some extent. The pandemic created several supply chain disruptions, some of which persist to this day. Likewise, businesses have been facing labor shortages, making it more difficult for them to meet consumer demand.

However, the demand side of the equation has likely contributed more to the upward pressure on prices, particularly over the last few months. As restrictions have been lifted, consumers have increased their spending on services such as travel and transportation. Overly generous fiscal stimulus from the federal government has likewise fueled aggregate demand. Under normal circumstances, the pandemic-related slowdown in economic activity that caused the supply-side issues would have also dampened consumer demand, allowing prices to remain at equilibrium. However, the fiscal stimulus had the intended effect—stimulate demand—but since the supply side could not keep up, it created a scenario in which prices have nowhere to go but up.

The Federal Reserve continues to insist that the inflationary pressures plaguing the economy are merely transitory and a product of the economy reopening. However, the Fed either ignores or is downplaying the true cause of inflation—a surplus of money in the economy. The Fed’s balance sheet soared past $8 trillion last month and the FOMC is not yet considering to taper their gargantuan asset purchase program, currently running at $120 billion per month.  Interest rates, the primary tool to contain inflation, remain firmly at 0% and that is unlikely to change anytime soon. Half the states continue to provide the enhanced jobless benefits that have been largely responsible for the current labor shortage, and will do so until September. Government spending will only increase under the current administration, adding fuel to the inflationary fire. Consumer prices have already advanced 3.3% year-to-date, well above the stated target of 2%. If this year’s changes to the CPI are annualized, inflation for 2021 would be around 7.2%—a level unseen since the early 1980’s and that would certainly test every known definition of the word “transitory.” The surplus of money in the economy is not going anywhere, meaning that the inflationary pressures that prices are facing are likely here to stay.