The US Index of Consumer Sentiment (ICS), as provided by the University of Michigan, tracks consumer sentiment in the US, based on surveys on random samples of US households. The index aids in measuring consumer sentiments in personal finances, business conditions, among other topics. Historically, the index displays pessimism in consumers’ confidence during recessionary periods, and increased consumer confidence in expansionary periods.

In March, the Index of Consumer Sentiment increased by 8.1% to a level of 83.0, the highest level since last March. The index of Current Economic Conditions also increased by 6.1% to a one-year high of 91.5. The Consumer Expectations index rose by 9.6% to a level of 77.5.

Consumer sentiment improved for the first time in three months to its highest level since the start of the pandemic. People seem to be more optimistic about the economic outlook as more people are vaccinated, labor market conditions continue to gradually improve, and in anticipation of a third round of stimulus checks. However, consumer sentiment remains well below pre-pandemic levels when the index frequently oscillated around 100 points. While consumers are now more confident about the economy as a whole, they largely remain uncertain about their own financial situation and expect to see only marginal gains in household income over the next year. Consumer’s inflation expectations remain elevated, especially in the near term. Likewise, they expect that interest rates, particularly those on mortgages and car loans, will rise over the next several months. Overall, increased optimism among consumers appears to indicate that spending will increase during the year ahead, which will help drive the economic recovery. 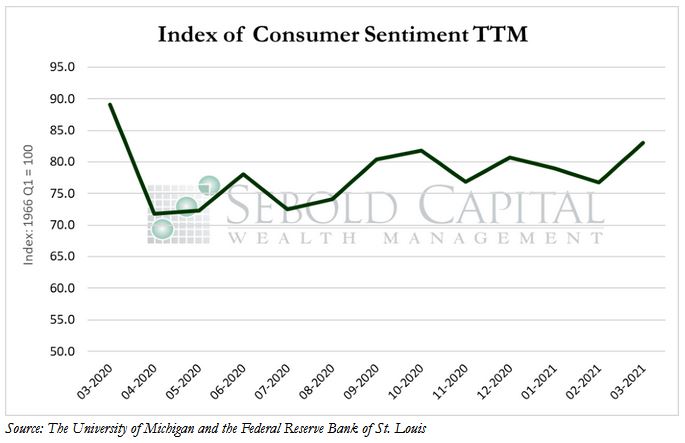