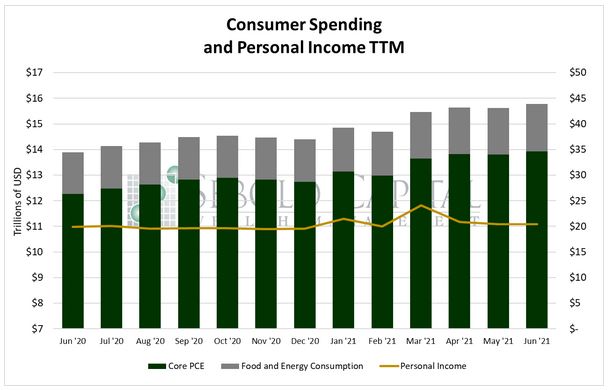 Consumer spending, measured by Personal Consumption Expenditures (PCE), makes up approximately two-thirds of the economy and is a direct measure of purchasing activity. PCE is a reliable indication of inflation because it is calculated from data acquired directly from the GDP report and businesses. It shows us where consumers are spending their dollars, whether it be durable and nondurable goods, or on services. Changes in the personal income level dictate consumer spending.

Spending rose in June as consumers enjoyed the first the full month without any real pandemic restrictions. Purchases of goods and services have now surpassed pre-pandemic levels, indicating healthy consumer demand for now. Prices continued to rise, however, at a seemingly slower rate. The PCE price index advanced 0.5% to a level of 115.3, while the index that measures core prices rose 0.4% to 117.3. The monthly changes to the indices remain well above historical trends.  Year-over-year PCE inflation remained at 4.0%, while core PCE inflation rose from 3.4% to 3.5%. While some might take that as a sign that the supposedly transitory inflation is beginning to peak, it is more likely that this is simply last year’s base effect fading—meaning that the increase in prices more accurately reflects inflation now.

Annualizing the last three months of the indices would put PCE inflation at 6.6% and core inflation at 6.3% for 2021. The latter serves as the Federal Reserve’s preferred measure of inflation. It is extremely concerning that inflation for the year is on track to be three times the Fed’s stated target of 2%. While the Fed is finally getting closer to providing a timeline for tapering their asset purchase program, they are still reluctant even consider raising rates, so prices will likely continue to rise for the foreseeable future.

Consumer spending might suffer in the next few months if strict measures are put in place again to contain the spread of this new Delta variant. If no such measures are imposed, then consumer spending will likely normalize and return to pre-pandemic levels as the effects of the economy reopening—and all the pent-up demand—begin to fade. 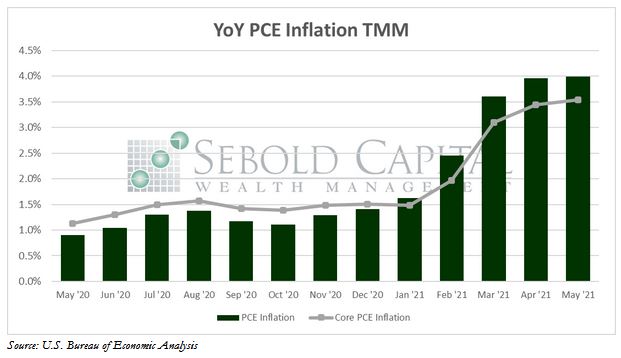