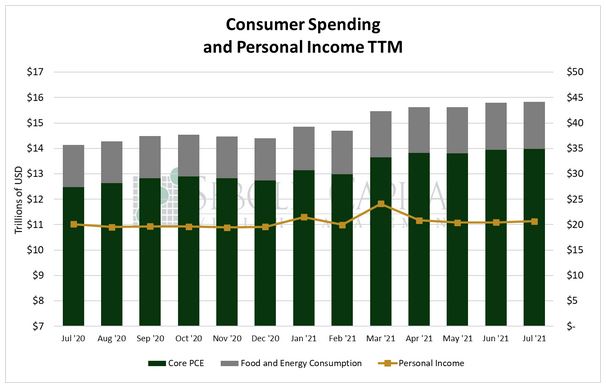 In July, personal consumption rose 0.27% to $15.83 trillion, while personal income increased by 1.11% to $20.67. Excluding food and energy, personal consumption rose by 0.30% $13.98 trillion. Purchases of durable goods declined for the third consecutive month, falling by 2.29% to $2.01 trillion. Purchases of non-durable goods likewise declined, falling by 0.38% to $3.46 trillion. However, consumer spending on services rose by 1.0% to $10.36 trillion, marking the fifth consecutive monthly advance for the category.

Consumer spending remained nearly unchanged last month, despite a relatively robust gain in household income. The slowdown in momentum is being blamed on the now infamous Delta variant, however, the data suggests otherwise. While spending on both durable and non-durable goods suffered, consumers continued to shell out money on services. These include activities such as travel, dining out, and attending concerts and festivals—activities that consumers would likely avoid if getting sick was a concern for them.

Inflation, as measured by the PCE Price Index, continued to rise in July. Prices rose 0.4% for the month and 4.2% on a year-over-year basis. Core prices, which exclude food and energy, advanced 0.3% from the previous month and 3.6% on a year-over-year basis. The latter, which serves as the Federal Reserve’s inflation measure, has risen above its stated target enough for them to finally acknowledge that perhaps inflation is a bit less transitory than they originally thought. Fed officials have stated that they will likely begin to wind down the central bank’s asset purchasing program later this year. However, that will likely do little to reduce price pressures, as PCE inflation is on track to hit 6.3% for the year (if the last four months are annualized) and core inflation may reach 6.2%—over three times the Fed’s stated target.

In fact, unless the Fed raises interest rates—which they remain unwilling to do—the inflationary pressure on prices is unlikely to ease. The Fed has blamed rising prices mainly on supply chain shortages and bottlenecks caused by booming consumer demand when the economy reopened. That is, to some extent, true. However, they fail to point out that the surge in consumer demand has been partly fueled by the unprecedented influx of money into the economy. So, the issue is less of a shortage of supply and more of a surplus of money. Until the Fed acknowledges this and addresses the root cause of the problem, inflation will likely remain elevated for the foreseeable future. 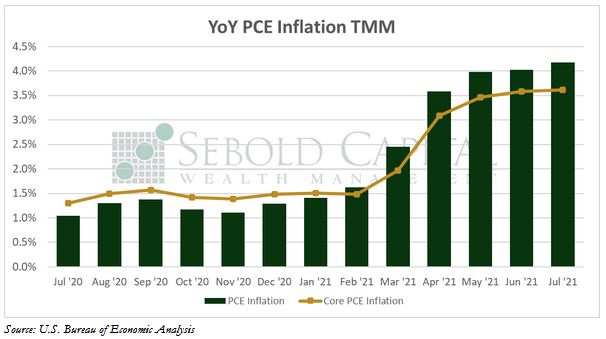