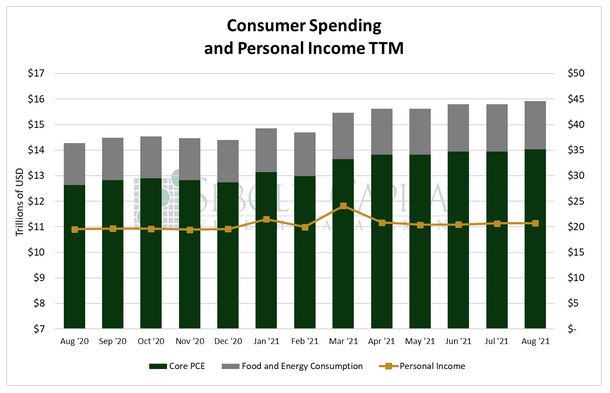 Consumer spending picked up in August, driven by nominal wage gains and higher savings from the previous month. The personal savings rate increased by 1.1% in July, leaving consumers with more money to spend on goods and services. The gains in non-durable goods and services were partly offset by lower consumer spending on durable goods. Consumers are likely putting off purchases of big-ticket items, such as cars, due to a severe lack of supply and rising prices.

Prices continued to rise in August, beating expectations. Prices increased by 0.4% from the previous month, and core prices saw a 0.3% advance. Inflation, as measured by the PCE Price index, rose to 4.3% on a year-over-year basis. Core inflation, which is the Federal Reserve’s preferred measure of price increases, remained at 3.6%. Annualizing the last three months of the price index would put PCE inflation at 5.5% for 2021. Core inflation would hit 4.6%, more than double the Fed’s stated target of 2%. While the Fed has suggested that it could start tapering its gargantuan asset purchase program as soon as November, that is unlikely to put much of a dent on the inflationary pressures the economy is facing; continuing to buy assets at a slightly slower pace hardly counts as tightening monetary policy. Price pressures will undoubtedly continue to mount until the Fed properly tightens monetary policy, which very much includes raising interest rates, but the timeline for that remains unclear. 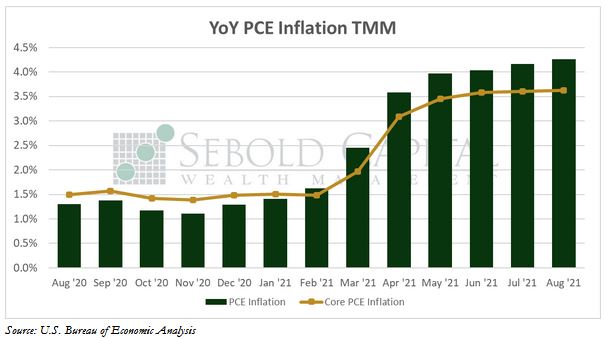