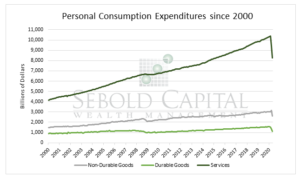 Consumer spending, measured by Personal Consumption Expenditures (PCE), makes up approximately two-thirds of the economy and is a direct measure of purchasing activity. PCE is a reliable indication of inflation because it is calculated from data acquired directly from the GDP report and businesses. We see where consumers are spending their dollars, whether it be durable and non-durable goods, or on services. Changes in the personal income level dictate consumer spending.

This past month the economy witnessed a shift as personal income continued to increase but personal consumer expenditures took a major hit. Normally these two go hand in hand and have a direct relationship, however, the Coronavirus pandemic has instilled a concern within the general public that has diminished its desire to spend. This concern is evident through the Consumer Price Index for All Urban Consumers (CPI-U) which has decreased 0.8% in April and is the largest monthly decline since December 2008. This decrease in CPI is a direct result of a decline in the energy index which fell by 17.7% in the month of April. Oil companies were forced to sell their products for astounding losses due to a surplus of oil and minimal demand as a result of the stay at home orders.  While this decrease indicates that the cost of living for the average household is going down, the economy continues to see an uptick in frugality and savings as millions of Americans fear financial instability and job loss. With the unemployment rate nearing 15% and 23.1 million people out of jobs, it is evident that the government’s decision to sell bonds and increase the money supply through the Federal Reserve is in effort to increase personal income while simultaneously encouraging an increase in personal spending. As businesses begin to reopen and the money supply increases, it is projected that, in the month of May, personal spending will return to normal levels, the savings rate will decline, and the CPI will slowly begin to increase once again. 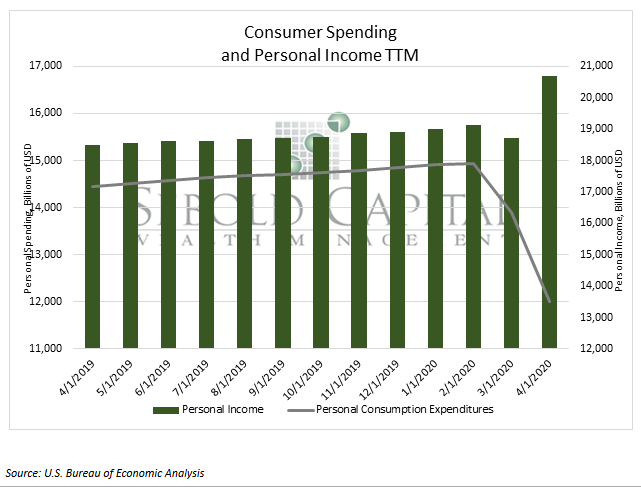