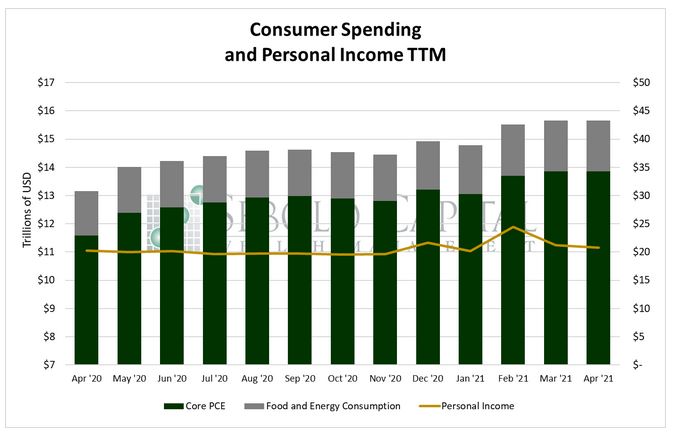 Consumer spending, measured by Personal Consumption Expenditures (PCE), makes up approximately two-thirds of the economy and is a direct measure of purchasing activity. PCE is a reliable indication of inflation because it is calculated from data acquired directly from the GDP report and businesses. We see where consumers are spending their dollars, whether it be durable and non durable goods, or on services. Changes in the personal income level dictate consumer spending.

In May, personal consumption remained nearly unchanged, rising by a mere 0.02% to $15.66 trillion, while personal income declined by -1.95% to $20.80 trillion. Personal consumption excluding food and energy also remained unchanged, declining by 0.01% to $13.86 trillion. Purchases of durable goods fell by 2.76% to $2.07 trillion, and consumption of non-durable goods declined by 0.38% to $3.40 trillion. However, consumer spending on services advanced by 0.73% to $10.19 trillion and has essentially returned to pre-pandemic levels.

Consumer spending stagnated and personal income declined for the second consecutive month, all while prices continued to soar. The PCE price index—the Fed’s preferred inflation measure—increased by 0.4% last month, while Core PCE prices rose by 0.5%. This puts year-over-year PCE and inflation at 3.9% and core inflation at 3.4%, well above the Fed’s stated 2% target. PCE inflation is at its highest level since mid-2008, while core PCE inflation just hit its highest level since 1992. The Federal Reserve continues to blame the sharp rise in prices almost exclusively on pent-up consumer demand and supply-chain constraints and absolving their unprecedently-dovish monetary policy of any blame. However, with nearly every inflation indicator flashing warning signs, that narrative seems increasingly flimsy.

While consumer demand has certainly increased now that the economy has essentially fully reopened, record-low interest rates and a surplus of money in the economy are likely having greater effect on prices. Consumers are shifting their spending from goods to services; spending overall has surpassed pre-pandemic levels. Income has also increased and topped pre-pandemic levels, fueled primarily by three rounds of stimulus checks and overly generous unemployment benefits that have left individuals who would otherwise have very little disposable income strapped with cash. These are only some of the factors contributing to the inflationary pressures being felt throughout the economy. Until the Fed actually tightens monetary policy (and does not just talk about talking about it) and the additional UI benefits expire, prices will likely continue to rise and real consumer spending will either remain elevated. 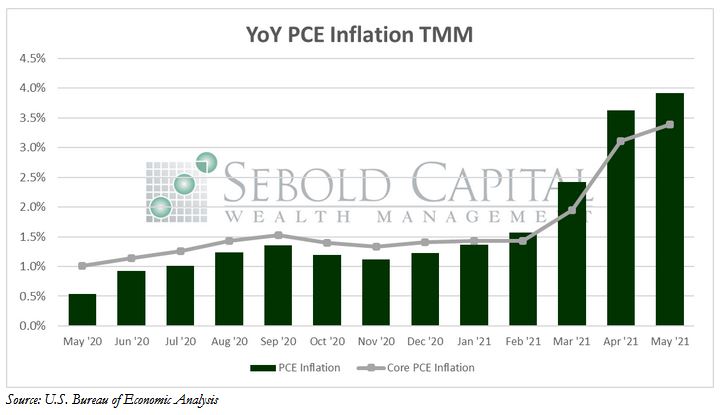