In April, the CPI surged by 0.8% to a level of 266.8—the largest single-month increase since 2009. Annualized inflation currently sits at a 13-year high, soaring to 4.2% from 2.6% in March. Core CPI, which excludes prices for food and energy and is therefore considered to be less volatile, had its largest single-month change since 1981. Core CPI rose by 0.9% to a reading of 273.7, which puts annualized core inflation at 3.0%.

Last month, consumer prices continued to rise as they faced upward pressure from supply constraints, increased consumer demand, and an ever-expanding money supply. In particular, consumers faced soaring transportation costs, with prices for used cars and trucks soaring by 10% from March. Automakers have been facing a worldwide semiconductor shortage, which has reduced production at factories and made it increasingly difficult for dealers to keep cars on their lots—nudging consumers toward preowned vehicles. Used car sales, which are up 58% from last year, were likely also helped by the latest round of stimulus checks, which provided consumers with an influx of cash that some probably destined towards a new car purchase. Transportation costs in general rose by 2.5% from the previous month and have increased by 14.8% over the past year.

Prices for food and beverage also continued their upward trajectory, rising by 0.4% last month. Many food items were considerably more expensive in April, including fresh fruit and dried legumes. Bacon had the largest yearly price increase among all food items tracked by the index, rising by 10.7% and climbing 3.3% from March. Apparel prices increased for the first time in two months, climbing 0.3% from the previous month. Education and medical care costs rose by 0.2% and 0.1%, respectively.

Energy prices were the only component of the CPI that declined in April, although their -0.1% had a negligible effect on the index, especially as energy costs had surged by 5.0% the prior month. Gasoline prices fell by 1.3% and fuel oil prices sank by 2.2% last month. However, gasoline prices have soared 49.6% and overall fuel prices have climbed 28.2% since last year. Fuel prices are likely to keep rising in the near term, as the recent Colonial Pipeline shutdown has pushed the nationwide average price for a gallon of gas to a six-year high.

Annualized inflation in April seemed to surprise everyone by rising above 4% for the first time since 2008. Predictions hovered around 3.6%, which was already considerably higher than March’s inflation reading of 2.6%. However, rising inflation should not come as a surprise given the unbelievable scale of government spending since the start of the pandemic. The money supply has increased by 372% since the pandemic first hit, inflated by seemingly endless amounts of fiscal stimulus. The Federal Reserve’s policy of keeping interest rates at 0% has essentially eliminated one of the primary buffers against inflation. Many consumers find themselves with excess cash after three rounds of stimulus checks and fourteen months of extended unemployment benefits. The economy has largely reopened, which has allowed much of the pent-up consumer demand to be released. While the Fed continues to insist that this inflationary pressure is merely transitory, many are concerned that it is very much here to stay. Inflation is typically contained by raising interest rates, something the Fed has stated it will not do until the economy is back at full employment, currently targeted at year end 2022. Government spending will likewise only continue to rise, as the ink has barely dried on the latest trillion-dollar spending bill and there is already another $2 trillion infrastructure bill in the works. Consumers should brace themselves for higher prices and more “inflation surprises” in the near term, as once the genie is out of the bottle, it is notoriously difficult to put it back in without some drastic policy changes. 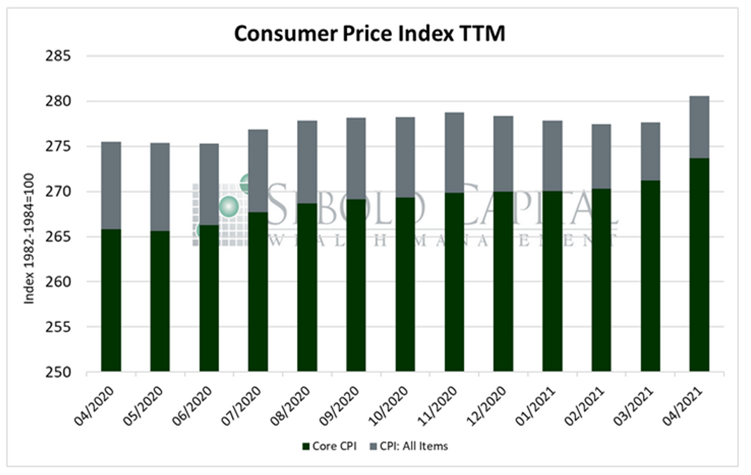