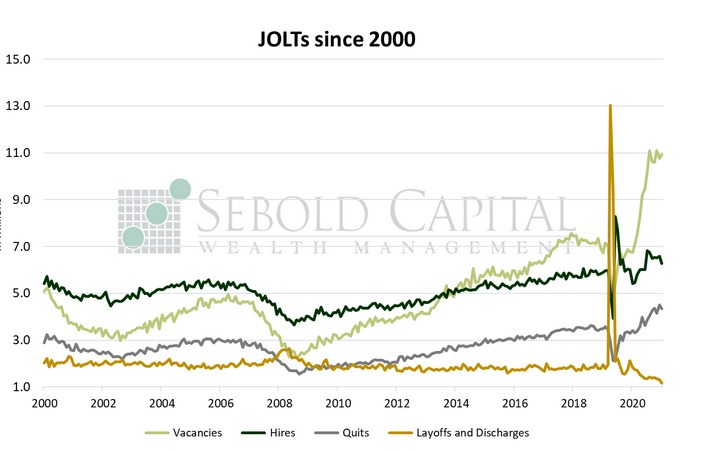 The labor market ended the year about as tight as it has ever been, with the number of job openings continuing to exceed the number of people hired to fill those positions by a wide margin. In December, there were 173 jobs available for every 100 individuals who are considered to be unemployed—yet another record high. The gap between hires and vacancies widened to a record high of 4.66 million, while layoffs reached a record low.

Firms continue to hold on to whatever workers they have, at least for now. Labor turnover remains elevated, although the quits rate saw a slight decline from its all-time high of 2.9% to 2.8%. Workers leaving their jobs voluntarily is usually seen as a sign that they have enough confidence in the state of the economy as to believe that they can find another job with relative ease. Quitting has remained at historic highs over the past several months as the economy seemed to decidedly be in expansion territory. However, some recent indicators appear to show that said expansion may be starting to moderate. Consumer spending declined in December, as did manufacturing output; inflation also soared to a forty-year high. If economic conditions continue to moderate—at least in the eyes of everyday workers—then the quits rate will likely decline as more workers may choose to hold on to their jobs. That may help alleviate the labor shortage to some extent since firms would have to replace fewer workers, but given that there is still such a large gap between vacancies and hires despite having a sub-4% unemployment rate, the labor shortage is likely to persist for a while. 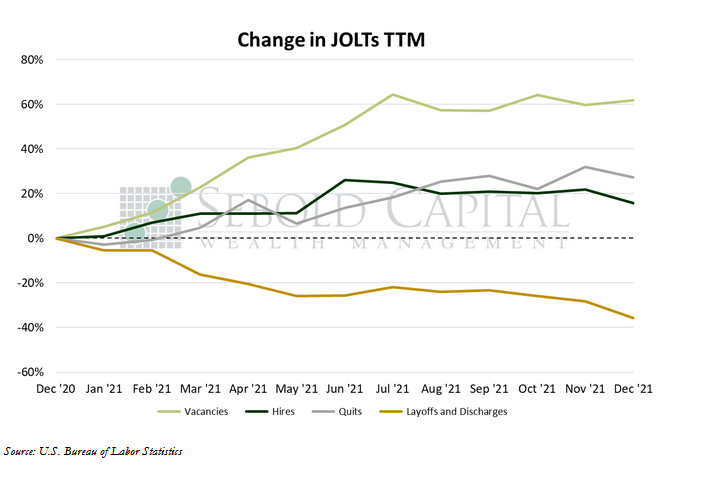