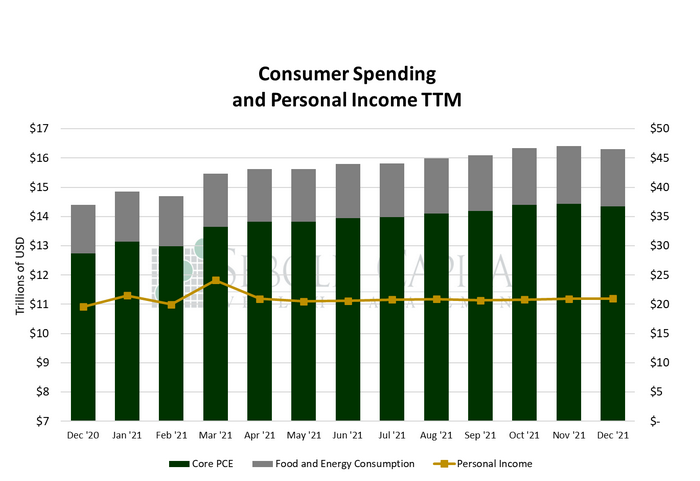 Consumer spending fell in December for the first time since last February as prices continued to surge, putting a dent on one of the key drivers of economic growth. PCE inflation rose to 5.8% last month, its highest level in 40 years. Even after removing food and energy, the PCE price index rose to 4.9%, its highest level since 1983. The PCE price index serves as the Federal Reserve’s preferred measure of inflation, and it is currently more than twice the stated target of 2%. With rising inflation, it is not surprising that consumers are spending less. After-tax personal income fell by 0.2% in December when adjusted for inflation, meaning workers got a pay cut in real terms, continuing a five-month-long trend. That bodes poorly for consumer spending in the near future and—given that consumption makes up roughly two thirds of GDP—also for the economy as a whole.

Inflation and supply-chain disruptions continue to weigh heavily on durable goods lately. Spending on this category, which includes goods that are expected to last more than three years, has declined by roughly 5.3% since November. Non-durable goods have not fared much better. Spending on services did increase last month but is losing steam and will be impacted by rising input costs. While economic growth in 2021 did manage to beat expectations—at least according to the first GDP estimate for Q4, the final number remains to be seen—it will likely moderate in 2022, partly as a result of the pressures that consumers are facing. 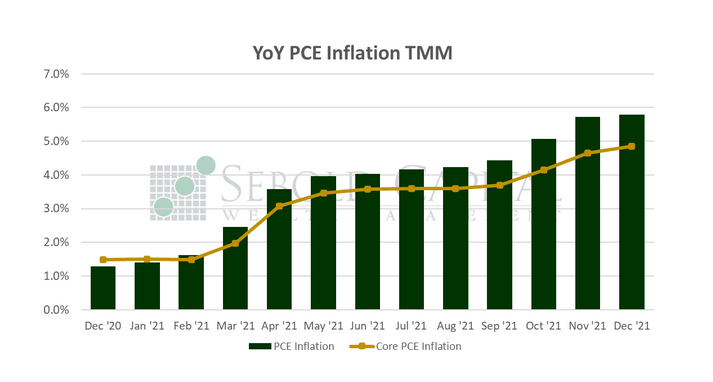