I have included, at the end of this note, a few paragraphs of Liz Ann Sonders, Chief Investment Officer of Charles Schwab.  Her advice is sound in times like these.

Does this mean that our economy goes into recession?  From a number’s perspective, that is becoming more likely.  This is what the stock market is projecting.  But as we know the markets always seem to overshoot on the high side, and then undershoot on the low side.  Clearly the traders that influence market prices are trying to take advantage of this.

Remember that the stock market is a discounting function of the future earnings of companies.  I do agree that Q1 is pretty much a loss for the reasons cited above.  I also believe that in 60 days, we will not be talking about this much.  If you want to follow along in real time where most of the publications are citing the data, here it is (John’s Hopkins – https://www.arcgis.com/apps/opsdashboard/index.html#/bda7594740fd40299423467b48e9ecf6).

There are two other issues that we believe are more significant for the market.  First, the prices of oil.  As the chart above indicates, oil prices have literally fallen off a cliff.  This has impact on producers and users of oil.  The cause for this is a price war that has erupted with Russia and OPEC (Saudi Arabia) as the key players, with the United States fracking businesses in the middle.  Russia and Saudi Arabia have significant reserves to continue their battle on gaining market share.  This is not so much the case from US based frackers.  Most of these businesses are highly levered and will not be able to last very long with oil prices in the $30 a barrel range. That will put many of them out of business. 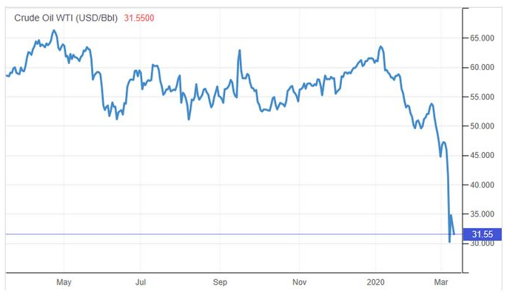 The upside, in the longer run, is that the gas people buy will become significantly cheaper.  While not immediate, this is certainly a “tax cut” for those that drive combustion engine cars (sorry Tesla owners.) It will also help a lot of manufacturers that have oil as an input to their processes, lowering their overall costs of goods.

The second item is interest rates.  It too has also fallen off the proverbial cliff. 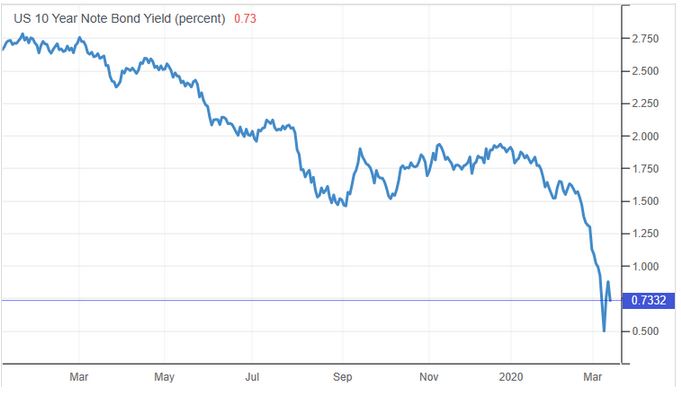 While we did have the expectation that the 10-year treasury would get to the 1% rate, we did not anticipate the speed at which it would happen.  The fall off, in our opinion, was a response to the oil battle, not the COVID-19 virus, although it would be very difficult to untangle the differences.

There are, again, two very distinct impacts from this decline. On the positive side, interest costs have come down to almost nothing.  (On a side note to this, we would recommend you contact your mortgage broker to look at the costs of refinancing.) Mortgages, business loans, capital loans, and everything related, have all gone down in cost.  Not to mention the cost of the US government debt which will fall rapidly.  (We do see a government stimulus program in the works which presumably will be financed from increased levels of debt, but at a lower cost.)

On the negative side, there will be very few places to get yield from fixed income instruments.  Getting less than 1% per year from a 10-year bond, which according to government statistics is lower than inflation, is rather poor.  Bank yields will also go lower, if not to zero.  This will hurt those who use either CD’s or savings accounts to generate their income.

So where do we go from here?  Short term, very difficult to tell.  I have seen less than rational decisions made over the past week.  People become more afraid of things they cannot see, and do not understand, even if it irrational.

We, as a whole, are much more afraid to fly, when the statistics are clear that driving is much more dangerous.  According to the CDC (https://www.cdc.gov/coronavirus/2019-ncov/cases-in-us.html#reporting-cases) as of this writing, there have been 19 reported cases of COVID-19 in the State of Illinois, yet conference after conference have been cancelled.  I hear that it is out of an abundance of caution, which I understand.  Yet if the numbers out of the CDC are to be believed, we have a higher chance of dying from influenza than this particular strain of the flu.  I have never heard of an event being cancelled as the result of an outbreak of the flu.  Are we overdoing it?  Maybe, maybe not.  I am not a medical doctor so all I can do is rely on the information that I get from the professionals in this space, knowing their biases.

Now to the valuation of the markets.  They were getting a little overextended toward the beginning of the year.  The challenge from a portfolio perspective is they can be extended for a long period of time.  [see S&P 500 from 1994-1999].  They are certainly much more fairly valued now and are even becoming inexpensive.

But there is much we do not know.

What will the earnings be in Q1?  Most companies have told the street to forget their guidance.  Will they be negative on a whole or merely not be positive?

How will the oil war end with Russia and OPEC?  Neither state benefits from cheap oil, so is it reasonable to assume that oil will remain at $30 per barrel for a long period of time? Both have the ability to impact oil prices on a moment’s notice.  Will they, and if so, when?

Will the COVID-19 virus cases climb in the United States and abroad?  If so, what will continue to be the economic impact?  If not, how long will it be until the US supply chain is restored?  Are the steps that are being taken to prevent the spread of the virus helpful?  Or overdone?

Will there be any major companies that will fail as a result of the virus?  Can Boeing continue to exist with the dual problem of not being able to sell 737 MAXX airplanes and all of their customers being subjected to no more full flights?

What we do know is that there is a treatment for COVID-19 right now, and some very smart people are working on a vaccine as we speak.  My hunch is that in three months we will not be talking much about it.

What we do know is that once this scare is gone, there will not be too much destruction in its wake.  Yes, some companies will have permanent losses, but when the scare is over, people will continue to travel.  I find it highly unlikely that this outbreak will permanently impact all travel related industries in perpetuity.

What we do know is that as a result of the interest rate declines, the net interest margin for banks will be lower in the future.  Will banks go under as a result?  Unlikely, they are very well capitalized as a result of some of the 2008-2009 banking reforms.

What we do know is that all businesses are working toward a solution for their companies so they can continue to provide value to their customers.  This will ultimately create stronger companies in the future.

What we do know is that Congress is working toward a stimulus package that will provide some short-term boost to our economy.  While interesting from a political standpoint, the economy is strong enough to withstand this outbreak without the need of a handout from Congress.  (That sentence alone proves that I can never become a politician, but in the long run, business should stay out of the pocket of the government.)

On the portfolio front, we are taking advantage of this dislocation to rebalance portfolios.  This will have the dual purpose of booking some tax losses and maintaining the proper long-term risk exposure.  This is certainly not a bet on where we think the market will be in two weeks.  There are too many unknowns for that.

As always, please don’t hesitate to call with any questions you may have.

When it comes to panic, the most obvious example is trying to dump investments when the market is dropping. This is a great way to invert the old adage about buying low and selling high. Never before has information about the global economy and markets been more readily available and disseminated. As a result, global markets have become more interconnected. In turn, our reaction mechanisms are heightened—but not necessarily to our advantage. Investors should rarely, if ever, react in a purely emotional fashion to a dramatic move in the market.

As we saw when this year began, greed can also lead us astray in a number of ways. First, there’s the temptation to load up on aggressive higher-risk assets in the hope of a big payoff. But there is a dark side to an aggressive posture’s potential higher returns: the risk taken in getting there. Aggressive portfolios’ higher historical returns have had a much wider range of returns—that is, a higher standard deviation, with greater “drawdowns,” or peak-to-trough declines, and volatility. And most importantly, those higher returns typically are generated through “stick-to-it-iveness,” not lucky bets.

Then there’s the temptation to try to “time” markets. It’s enticing to try to catch the next big investment wave (up or down) and allocate assets accordingly. But there are very few time-tested tools for consistently making those decisions well.

The time-tested and oft-expressed adage of “time in the market is more important than timing the market” is relevant to highlight in these trying times. As you can see in the chart below, using the S&P 500 as a proxy for the U.S. equity market, an investor in that index would have seen diminished returns by simply “missing” some of the best single up days. 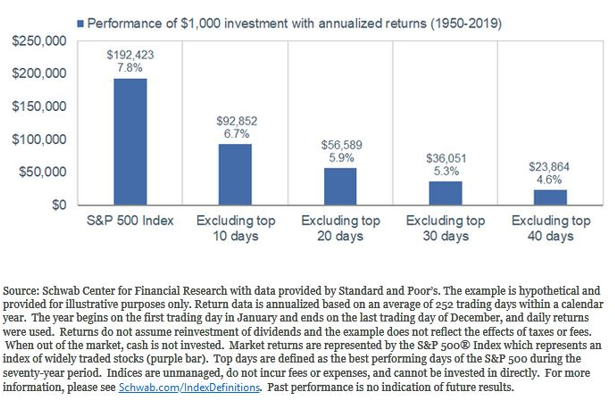 Time in the Market is More Important Than Timing the Market

I took the analysis above to a more detailed level. We know that large drawdowns in the stock market test the mettle of investors’ fortitude. Those who are fear- and greed-oriented are more likely to sell into major drawdowns; and to the extent they take an “all-or-nothing” approach by trying to “get out” (or “get in”) they risk missing some of those best days. In fact, as you can see in the table below, most of the best single days in the post-1950 history of the S&P 500 came either during bear markets or immediately following major drawdowns (when the “get out” investors likely already sold). In fact, of the 20 single best days for the S&P 500 since 1950, 15 of them came during bear markets; with all five of the occurrences during bull markets coming immediately after large drawdowns or bear markets that had just concluded. 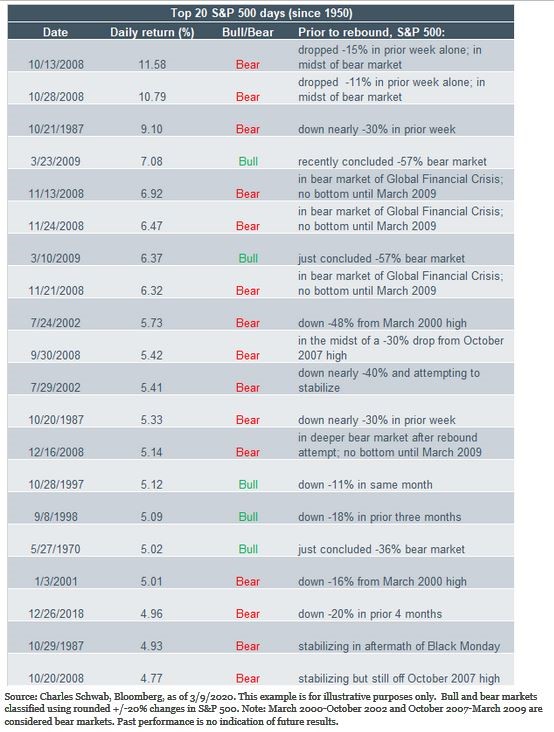 I often chide the financial press when they ask me, “Are you telling investors to get in or get out?” Neither “get in” nor “get out” is an investment strategy. They simply represent gambling on moments in time; when investing should always be a process over time.

Admittedly, the development of a long-term strategic asset allocation plan isn’t the hard part—it’s sticking to it that often becomes the real challenge. That can be especially difficult when markets are volatile, but if we learn from our mistakes, use our brains over our hearts and look to our portfolios as rebalancing guides, we can expect a more successful investing future and maybe even get a free lunch along the way.