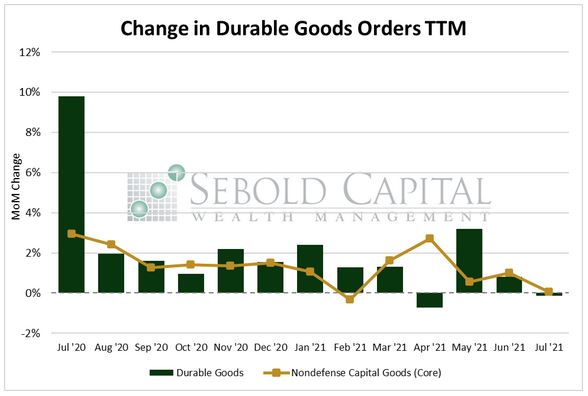 Durable goods orders, which are orders to buy products that are expected to last at least three years, indicate how busy factories will be. As the name suggests, durable orders provide a look into demand for equipment along with other big-ticket purchases, such as vehicles and appliances. An increase in capital spending and consumer purchases indicates an increase in business investment and personal consumption in GDP.

Orders for long-lasting manufacturers goods declined slightly last month, as manufacturers continued to face shortages and rising prices for labor and raw materials. While nondefense capital goods orders had their worst months since June 2020, so-called core capital goods—which exclude aircraft—remained unchanged from the previous month at $76.5 billion. Aircraft orders—a category that is often volatile—declined by 48.9% last month, taking a toll on the headline number. Core capital goods, a barometer for business investment, continue to moderate from last year’s rebound. Supply chain issues remain a problem for manufacturers, causing production to be constrained and many shipments to be delayed. As a result, unfilled orders rose for the sixth consecutive month, leaving businesses and retailers with increasingly lower inventories. However, demand for durable goods remains at elevated levels when excluding sector-specific declines, like the aforementioned aircraft or transportation equipment, and will likely support sustained production as supply chain constraints eventually clear up. 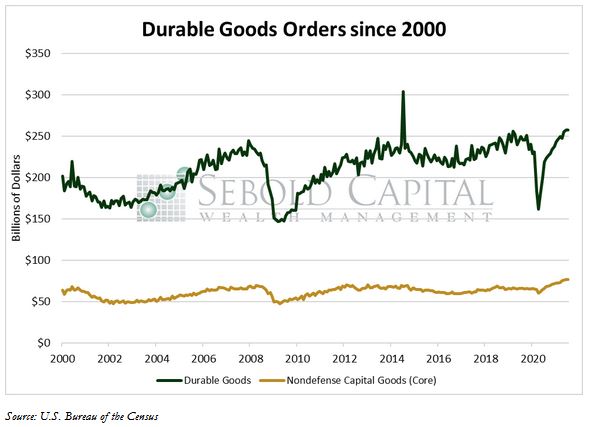