In December, U.S. employment rose by a mere 199,000, sharply missing market expectations once again and posting its smallest gain in a year. However, the headline unemployment rate declined to 3.9%, marking the first time it has dipped below 4.0% since February 2020. The average workweek remained unchanged for the third consecutive month at 34.7 hours. Average weekly earnings rose by $6.60 to 1,085.46, while hourly earnings increased by $0.13 to $31.31. The labor force participation rate remained unchanged at 61.9% and it remains below its pre-pandemic level of 63.3%.

December was seemingly another disappointing month for hiring, at least according to the BLS report. It sharply missed forecasts of around 425,000 new jobs. That has become a regular occurrence. Much of the discrepancy has to do with the report’s seasonal adjustment.  This is meant to account for the very predicable seasonal patterns in hiring; retail stores are likely to add more workers during the holidays and schools normally hire more staff during the summer right before school starts. Accounting for those factors usually gives a much more accurate picture of changes in employment during any given month. “Usually” is the key word here, because ever since the 2020 lockdowns distorted the labor market nearly beyond recognition, the BLS has been unable to properly adjust its report for seasonality—leading to some rather large upward revisions in previous months.

However, this time around the non-seasonally adjusted number was even lower than the headline number. Not adjusted for seasonality, payrolls rose only by 72,000, so the labor department’s seasonal adjustment is likely not to blame for this one. The number of jobs in the private sector looked slightly better last month, although at 211,000 (167,000 if the seasonal adjustment is removed) they were still nowhere near the 807,000 private payrolls that ADP reported just a few days ago. Government payrolls declined by 12,000 and have been continuously shrinking since August, offsetting private-sector gains and leading to lower headline numbers. That said, if the most recent revisions for October and November are added to December’s number, there was actually a gain of 340,000 jobs, putting the headline number much closer to market expectations; perhaps forecasters were not so wrong after all. It remains to be seen whether December’s report will be revised as it was the case for previous months, or if the November figure will be further updated (it was revised from 210,000 to 249,000). The unemployment level fell by 483,000 last month, so at least one revision seems likely.

Broken down by industry, the report shows that most of December job gains happened in the services sector—most specifically leisure and hospitality and food services. This is a trend that has been ongoing for several months, as these industries slowly regain the workers they lost during the pandemic. The warehousing and transportation industry also made notable gains last month. These industries have been posting strong gains for months and will likely continue to do so for some time. In fact, 2021 added more payrolls than any other year in record despite the apparent slowdown in hiring towards the end of the year—about 6.4 million jobs. It would perhaps be cause for celebration if the economy was not still messing 3.6 million jobs from pre-pandemic levels. Likewise, the unemployment rate declined at a very fast pace last year, although a smaller labor force was partly responsible for that rapid decline.

It was also a pretty good year for wages—or nominal wages at least. Average earnings rose by 4.7%, although with inflation nearing 7%, workers actually received a 2.22% pay cut in real terms. Given how much the labor market has tightened—as well as the abundance of indicators that point to workers leaving their jobs in pursuit of higher pay—it looks like a wage-price spiral may be inevitable at this point, at least until the Fed decides to take action and properly tighten monetary policy. 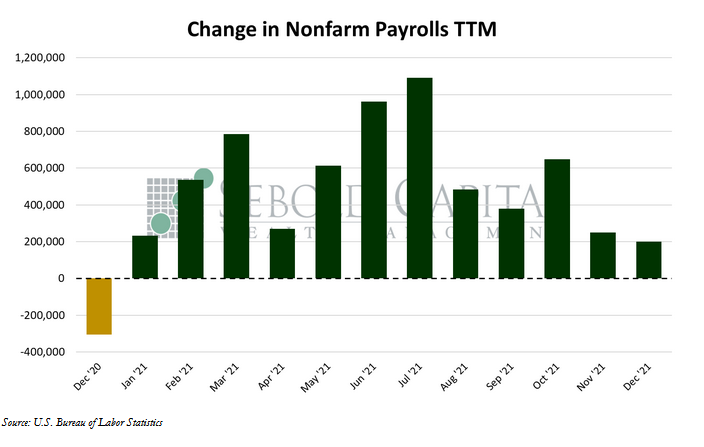