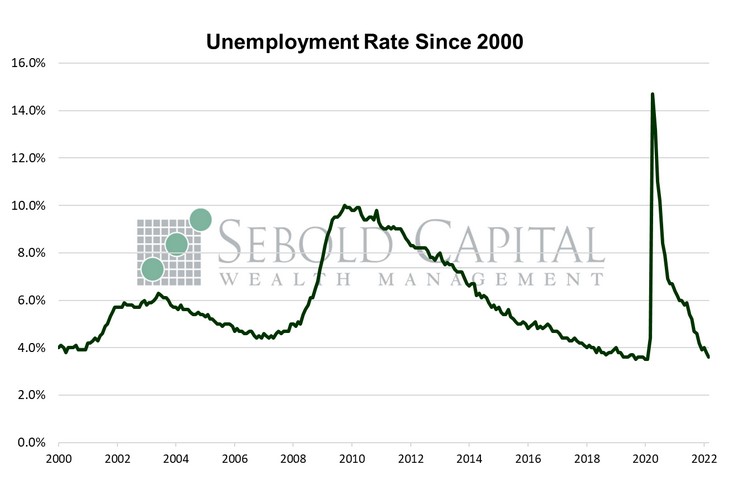 The Employment Situation is a report by the Bureau of Labor Statistics that gives us a look at the employment outlook of the US economy. The report does not include those employed in agriculture because of the seasonal nature of their work. This report obtains these numbers from 142,000 businesses and government agencies to track the new jobs added in non-farming sectors of the economy.

In April, U.S. employment rose by 428,000 on a seasonally adjusted basis, coming in slightly above market expectations of a 415,000 advance. However, the estimates for February and March were downwardly revised, negating some of April’s job gains. The headline unemployment rate remained unchanged at 3.6%, its lowest value since pre-pandemic levels. The average workweek also remained unchanged at 34.6 hours. Average weekly earnings rose by $3.46 to $1,102 and average hourly earnings increased by $0.10 to $31.85. The labor force participation rate declined for the first time in eleven months, falling from 62.4% to 62.2%. About 363,000 people left the labor force last month, its largest drop since January 2021. Broken down by sector, most of the job gains last month were in the leisure and hospitality, manufacturing, and transportation industries. Increased employment in these industries indicates that demand remains elevated for now, at least from the consumer side, despite a contraction in Q1 GDP.

Last month’s employment report can be interpreted in one of two ways. Some may point to the relatively robust 428,000 gain in nonfarm payrolls as a sign that the labor market remains strong. After all, the unemployment rate remains near record low levels and wages continue to rise. However, if one bothers to look under the hood, there are signs that may be worrisome. For one the labor force contracted last month, and it did so by a fairly wide margin, erasing most of March’s gains. Even though 428,000 jobs were added in April, the unemployment level only declined by 11,000. The employment level actually saw a drop of 353,000, implying that the bulk of last month’s change in employment was likely from people switching jobs as opposed to unemployed individuals finding employment.

Wage gains were also relatively weak last month. Hourly wages did increase by 0.3%, but that was below the expected 0.5%, and that is before accounting for inflation. As of the time of writing, we still do not have the inflation print for the month of April, but it is expected to remain elevated. Real wage gains last month were likely near zero or perhaps even negative; that is hardly a picture of strength. From a backwards looking perspective, there are even more signs for concern in the labor market. The day before the Employment report was released, the first estimates for unit labor costs and nonfarm productivity for Q1 came in. Labor costs surged by 11.6%, well above expectations of 6.1% advance, while nonfarm productivity plummeted 7.5%, sharply missing the forecasted 2.5% decline. Less productive workers earning higher nominal wages does not bode well for prices, even as the Fed does what it can to battle inflation.

While the labor market appears to be in a robust position, with low unemployment, consistent gains in nonfarm payrolls, and modest nominal wage growth, its resilience is about to be tested. Whatever strength does exist within the labor market, it is primarily a function of the nearly unprecedented labor demand that has been present since the economy reopened after the shutdowns. It is unlikely that kind labor demand will be sustainable if the Fed cannot manage to engineer a soft landing. However, it is equally unlikely that hiking interest rates to around 2% or 2.5% by the end of this year will push the economy, and by extension the labor market, into a recession. What is far more likely is that labor demand will cool and normalize down to levels that are more consistent with historical trends. 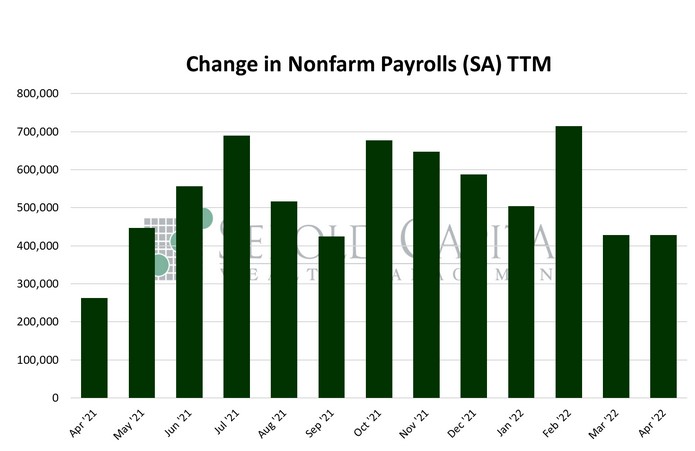 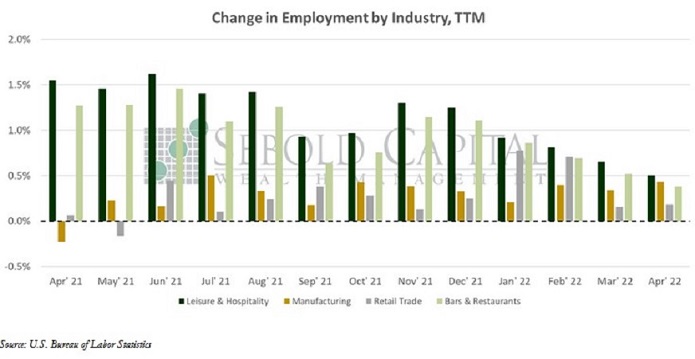