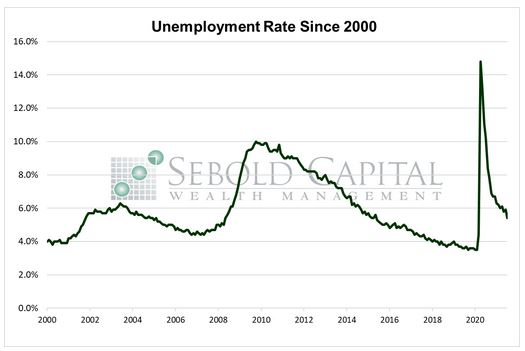 The labor market continued to improve last month with the largest single-month increase in employment in nearly a year. This came in as a surprise for nearly everyone, especially after a rather disappointing employment report from ADP earlier this week. Despite the better-than-expected employment numbers, it should be noted that payrolls remain about 5.7 million short of pre-pandemic levels. Government payrolls made up a larger share of the report than normal, rising by 240,000 and reflecting increased government spending. According to the BLS report, private payrolls increased by 703,000, more than double what ADP had reported for the month. What both reports did confirm was that most of the month’s hiring occurred in the leisure and hospitality industry, as well as smaller gains in business services, transportation, and health care.

Long-term unemployment (which exceeds 27 weeks) declined by 560,000 in July—the largest drop on record. This comes at a time when about half the states are phasing out the supplemental unemployment benefits that have likely been responsible for the rather sluggish labor market recovery. The evidence supporting the negative impact of the $300 weekly payment on the labor market is quickly mounting. Unemployment rates are lower in states that have opted out of the program, at an average of 4.6% compared to 5.7% for states where the program remains in place. Since early June, continued unemployment claims have declined in states that are ending the enhanced benefits early, while they have actually increased in the rest of the country. A report from the Foundation for Government Accountability, using internet browser data, found that work search activities rose sharply after states began announcing they were ending the unemployment bonus.

Once the enhanced unemployment benefits end at a nationwide level, which is scheduled to happen in September, the labor market as a whole should begin to recover at a faster rate. Individuals who are currently unemployed will have a stronger incentive to look for a job once unemployment insurance returns to normal levels. Provided that new restrictions are not imposed to contain the spread of the Delta variant, hiring will likely remain elevated in the following months and labor market conditions should continue to normalize. 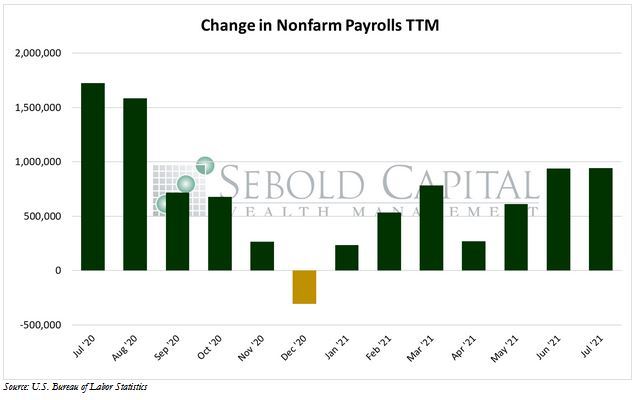