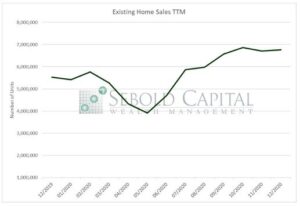 Existing home sales provide the number of purchases made for homes, condominiums, and co-ops that have already been built. Existing home sales give an indication of the demand for housing.  While home resales may not generate new construction jobs as housing starts do, they have a similar effect on consumer spending as people purchase items for their new home.

In December, existing home sales grew by 0.75% to a total of 6.8 million units after a brief November contraction. This represents a net increase of 50,000 units sold from the previous month. Housing inventory declined by 16.4% to 1.1 million units, highlighting the strong demand for housing. Broken down by region, home sales increased in the Northeast and the South, remained unchanged in the Midwest, and fell in the West.

Last year, home sales reached their highest level since 2006. Sales of previously owned properties were up 22.2% and housing inventory declined by 23% from December 2019. The strong demand for housing pushed the median existing home price to $309,800, up 12.9% from a year ago. The number of days that a property normally remains in the market fell from 41 to 21 over the last twelve months. With the average commitment rate for a 30-year fixed-rate mortgage sitting to 2.68% in December, demand for housing is unlikely to subside anytime soon. While homebuilding has also increased lately, it is going to be a challenge to keep up with the increasing demand. As a result, home prices could rise even further, creating a barrier for some first-time homebuyers. 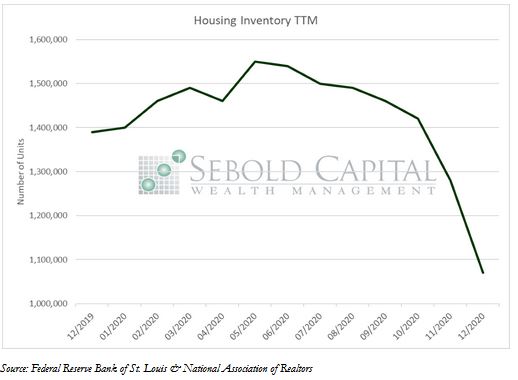