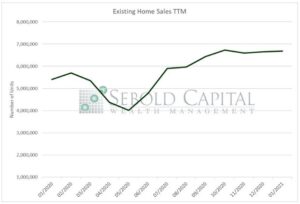 Existing home sales provide the number of purchases made for homes, condominiums, and co-ops that have already been built. Existing home sales give an indication of the demand for housing.  While home resales may not generate new construction jobs as housing starts do, they have a similar effect on consumer spending as people purchase items for their new home.

Sales of existing homes increased by 0.6% in January to a total of 6.7 million. This represents a net increase of 40,000 units sold from the previous month. Housing inventory declined for the eighth consecutive month and sits 1.9% below December’s level. The median sale price of an existing home declined by 1.3% to $337,700, although it remains 11.5% above last year’s level.

Broken down by region, existing home sales fell in the West and Northeast, by 4.4% and 2.2% respectively. Sales in the Midwest increased by 1.9% and by 3.2% in the South. Despite the mixed regional results, existing home sales in every region have grown by double digits over the past year. Nationally, sales of previously owned homes currently sit at a three-month high. Record-low mortgage rates continue to drive demand for housing, which has been strong throughout the pandemic as other areas of the economy lagged. Demand for housing is expected to remain strong in the coming months, even as mortgage rates are likely to rise in response to higher inflation and a ballooning budget deficit.