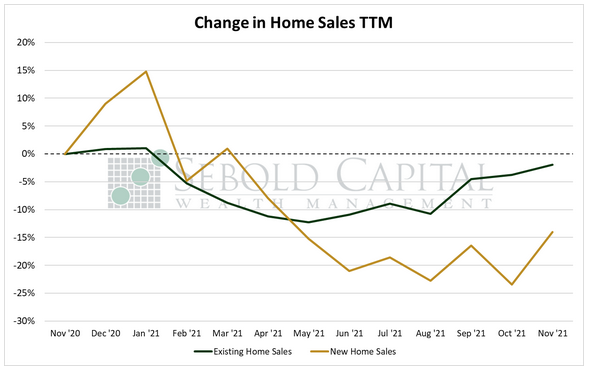 In November, sales of newly built homes increased by 12.4% to 744,000, while sales of existing homes rose by 1.89% to 6.46 million. Housing inventory declined for the fourth consecutive month, falling by 9.8% to 1.11 million, and is 13.3% below its level from a year ago. However, construction activity picked up last month, with building permit issuance increasing by 3.9% and housing starts rising by 11.8%. Prices for new homes reached another record high, increasing by 2.0% to a mean of $416,900. Meanwhile, mean sale prices for existing homes increased by 0.05% to $372,400. Mortgage rates remained largely unchanged in November, with the 30-year fixed rate sitting at 3.1% and the 15-year rate hovering at 2.4%.

New home sales largely increased last month, with one notable exception. On a regional basis, sales of newly built homes posted a very strong gain of 53.2% in the West, a 15.6% increase in the Northeast, and more moderate 2.7% advance in the South. However, sales plunged by 25.4% in the Midwest, where sales have fallen considerably since last year. On the other hand, existing home sales were far more consistent in November. Sales of existing homes posted modest gains of 2.6% in the West and 2.4% in the South, while remaining unchanged in the Northeast and the Midwest.

The housing market regained some steam in November, which is likely the result of a tightening labor market and expectations of higher mortgage rates in the near future by potential buyers. A lack of supply has been putting upward pressure on home prices across the board, and sale prices of new homes have likely also been impacted by higher material and labor costs. While this has certainly deterred some potential buyers on the lower end of the spectrum, buyers of higher end homes have seemingly paid little attention to the rising prices. Homes priced between $100,000 and $250,000 have seen a 19% decline in sales; supply also happens to be leanest on the lower end of the market. In comparison, sales of homes priced between $750,000 and $1 million have increased by 37% on a year-over-year basis, and those priced above $1 million have seen a 50% advance. Buyers are also snatching up homes nearly as soon as they come on the market, with the average property staying on the market for a mere 18 days. However, rising interest rates may extinguish some of the fire, especially if the Federal Reserve ends up increasing rates next year, as they are expected to do. Although they remain at historically low levels, mortgage rates have been recently trending upwards. After one or two rate hikes, it is likely that they will return to pre-pandemic levels, at which point demand may start to normalize. 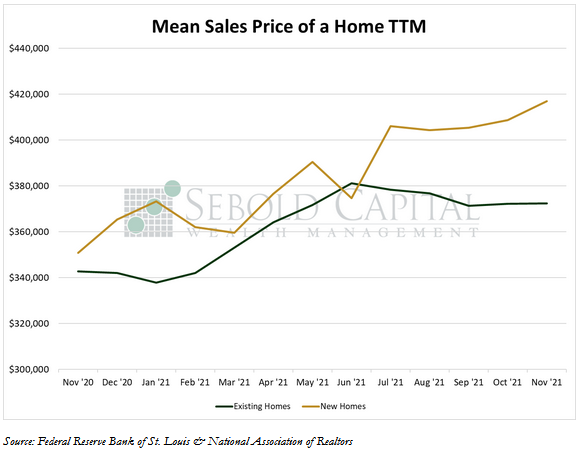