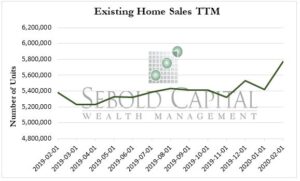 Existing home sales provide the number of purchases made for homes, condominiums, and co-ops that have already been built.  Existing home sales give an indication of the demand for housing.  While home resales may not generate new construction jobs as housing starts do, they have a similar effect on consumer spending as people purchase items for their new home.

We see a growing fluctuation in the index over the past month after a steady 11-month period of no growth. The previous stagnation occurred because the inventory of existing homes was down 4.3% since last year; which meant that people were not moving from their homes, most likely because of the wide geographic offerings of jobs, as well as because of rising student loan debt financially preventing millennials from moving. However, the existing homes housing inventory has once again begun to grow for the first time in almost 6 months at a rate of 2%, and we have seen a sharp spike in the sales of existing homes over this past month. The average sales price of an existing single-family home has decreased since June 2019 from $288,500 and hitting its lowest in January 2020 at $268,500, a nearly 7% decline. The average decline in single-family housing due to the increasing supply of housing lowers prices which then encourages interested buyers to purchase a home. Existing home sales is a lagging indicator and primarily shows how buyers react to changes in mortgage rates. As another contributing factor, 30-year mortgage rates were at a yearly low, at 3.5% in February, down from last January’s 4.4%. 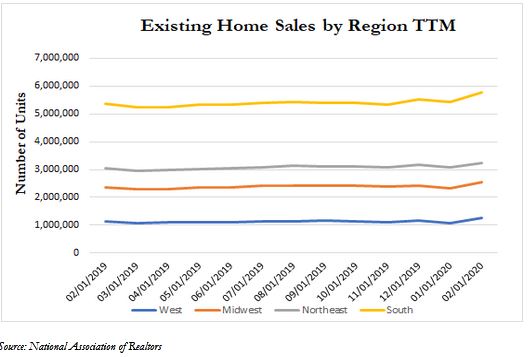