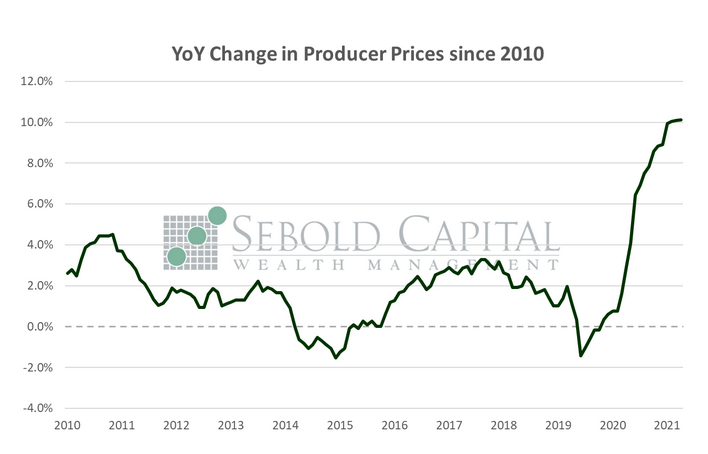 In February, the PPI rose by 0.8% to a level of 134.5, coming in just below market expectations of a 0.9% advance. Core PPI, which excludes prices for food and energy and is therefore considered to be less volatile, increased by 0.2% to an index level of 131.5, also below market expectations. However, both of January’s numbers were upwardly revised, so the net increase in producer prices was in reality much closer to the consensus. Year-over-year producer price inflation surged to 10.1%, while core producer inflation was 8.4%.

Producers faced higher costs last month, as energy and commodity prices continued to rise. After revisions, February marked the third consecutive month in which producer inflation exceeded 10%. While some immediately pointed that prices appeared to be moderating, at least compared to the previous month, it is important to point out that the report does not reflect any of the additional price pressures created by the situation in Ukraine. January’s print was also revised to the upside; in fact, January’s print was the highest month-over-month change in producer prices since at least 2009—when the index’s methodology was revised. February’s PPI number may also be revised in the upcoming months, erasing any false sense that inflation might have peaked.

In order to dispel said notion, all one has to do is merely delve into the report. Goods prices surged by 2.4%, their largest gain since December 2009; they were up 1.5% in January. Now, a good chunk of that increase was due to a 14.8% increase in wholesale gasoline prices, but fuel prices have not come down since last month. Food prices rose by 1.9%, as did transportation and warehousing costs. There were moderate declines in hotel room prices, as well as in the retail trade. However, recent increases in commodity prices—largely the result of geopolitical tensions—will likely translate in a higher PPI print for March. 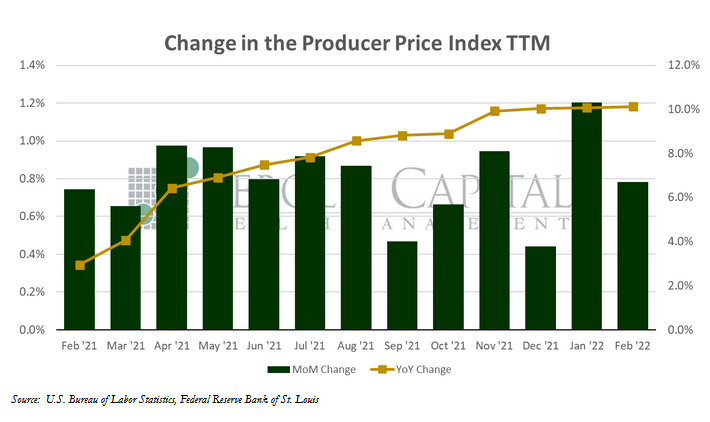