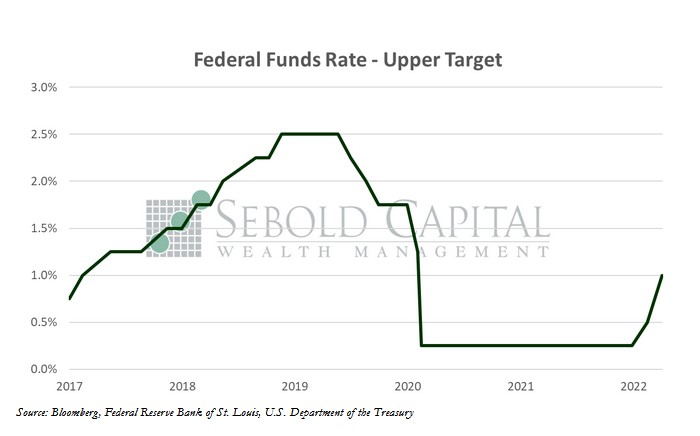 In a widely anticipated move, the FOMC announced on Wednesday that it was hiking interest rates by 50 basis points—the largest increase since 2000. This came as no surprise, with everyone from commentators, economists, money managers, and political pundits expecting the aforementioned half-point hike. This leaves the Fed Funds lower target (the overnight rate) at 0.75% and the discount rate (which serves as the upper target) at a full 1.0%. Fed Chairman Jerome Powell also hinted that two additional half-point hikes could be warranted in June and July given current economic conditions. Such hikes would lift the Fed Funds Rate to a range last seen in 2019.

It appears that the Fed is just playing catch-up with the bond market at this point. Yields have moved considerably higher since the beginning of the year, with the long end of the curve recently rising above 3.0% for the first time this decade. In fact, the yield on the 10-year Treasury has effectively doubled since January.

The good news is that the curve is no longer inverted between the key 2 and 10-year maturities, although the spread between the two remains miniscule. At the time of writing this, the yield curve remains inverted along the 7 and 10-year maturities and the 20 and 30-year maturities, although considering how volatile the bond market has been lately, this could be corrected at any moment. It’s not just Treasury yields that have been climbing lately, mortgage rates have also soared. The average 30-year mortgage rate just hit its highest level since 2009 at 5.27%.

We also have some insight on just how the Fed plans to shrink its gargantuan balance sheet, which stands at $8.93 trillion. The plan is to do so passively by allowing bonds to mature without reinvesting the proceeds into new securities. This will likely help moderate yields to some extent, which would have undoubtedly surged if the Fed tried selling billions of dollars’ worth of bonds on the open market. The Fed will allow up to $30 billion in Treasuries and $17.5 billion in mortgage bonds to roll off every month between June and August. Come September, this will increase to $60 billion and $35 billion, respectively. Here is what this would hypothetically look like. 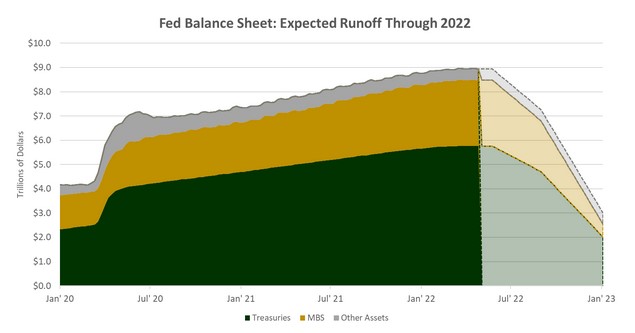 The fact that Powell clarified that a three-quarter-point hike was not a possibility, was a large communication miscue on his part.  Jawboning the market and putting forth the potential of Fed rates hikes can have a much more effective reaction from the market, if they believe that it could happen. Markets sold off as a result of taking this possibility off the table.

As things currently stand, it looks like the Fed Funds Rate will be around 2.00% by the end of the year. That remains a fairly accommodative monetary policy, and the current 1.00% target rate certainly remains accommodative from a historical perspective. In 1980, when the high inflation of the 70’s and 80’s peaked, the Fed Funds Rate was around 14%, and it got as high as 16%. Whether a 1% or 2% Fed Funds Rate will have the desired impact on (at least) 8.5% inflation remains to be seen. Shrinking the balance sheet, if the Fed can successfully pull that off, will undoubtedly help. But one thing is clear, interest rates are on the rise again.