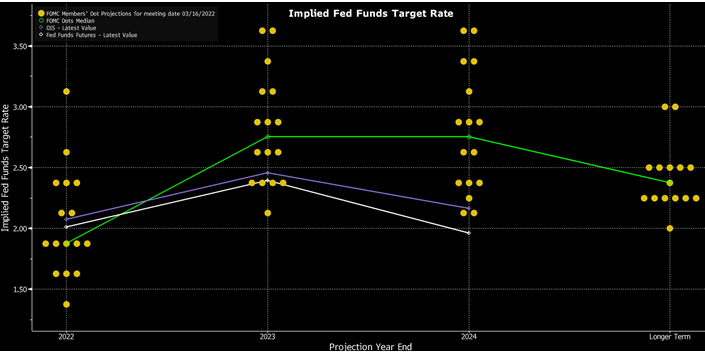 As expected, the Federal Reserve announced today its first interest rate hike since 2018—25 basis points. This was not a surprise; market participants expected this. Even though some Fed officials briefly hinted at the possibility of a 0.50% hike at one point, they ended up forgoing that option, likely to avoid further destabilizing the markets after the bout of volatility resulting from the war in Ukraine.  In early February, before the situation in Ukraine became a top concern for the markets, the CME FedWatch Tool indicated that the futures market was pricing in a 0.50% hike with as high as a 93.7% probability.

It was not, however, a unanimous decision. St. Louis Fed President James Bullard dissented in favor of a .50% hike. This was a rare dissent in such an important decision as to start raising rates. This will put upward pressure on hikes later this year.

The Fed did signal six more hikes this year which would leave us with an upper Fed Funds target of 2.0%. Borrowing costs had already increased, even before this Fed Funds hike. Corporate borrowing costs, measured by the spread between investment-grade and Treasury yields have increased in recent days, while 30-year mortgage rates now hover around 4.5%.

Although the Fed met expectations in regard to interest rates, what did surprise everyone was their inflation forecast in combination with their expected unemployment rate; the two items they are directly responsible for. Expectations for this meeting’s core PCE inflation forecast hovered at 3.5%, compared to the 2.7% projection Fed officials offered in December. Instead, the Fed now expects core inflation to end the year at 4.1% and overall inflation at 4.3%. With this new projection on rates, they made no adjustments for unemployment rates.  Should growth slow in the future, would that not have a negative impact on employment?  These numbers do not add up.

Powell also remained optimistic about economic conditions and stated that the Fed does not foresee a recession within the next year; bond traders disagree. We saw some interesting action on the yield curve surrounding the Fed’s announcement. The already-flat curve flattened even further, with the 10-year premium over 2-year yields falling to about 23 basis points. Even more interesting, the 5-year and 10-year yields briefly inverted right after the announcement and the spread has remained miniscule in the hours following the decision. Admittedly, it is a bit early to take this as any sort of sign of impending doom. Everyone—equity and bond markets included—is still digesting the announcement. The next few days will provide more and better clues of what the markets expect moving forward. 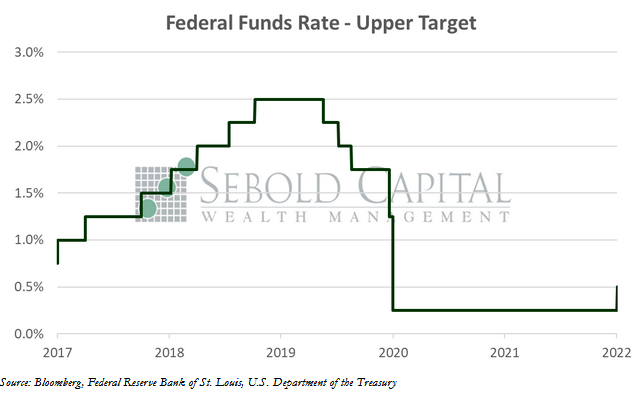