The Federal Reserve has a dual mandate; full employment and price stability.  As the chart below suggests, we are as close to full employment as we can get.  The Fed should not even be thinking about trying to create more jobs with monetary policy. 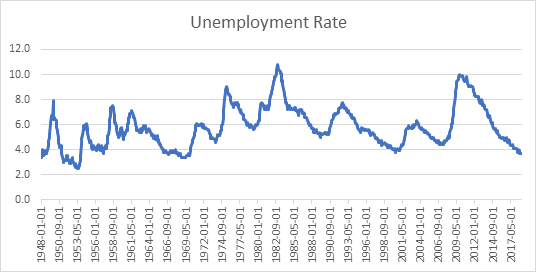 On the Inflation front, we see similar data.  There is no inflation that has been caused by monetary policy.  Where many economists make the mistake is they take supply and demand issues and extrapolate inflation from that.  For example, when OPEC lowers oil production and prices rise, is that inflationary?  The answer is no.  That is a business issue that the Federal Reserve has absolutely no control over.  So, when anyone says that we have inflation because of supply issues with oil, you have to scratch your head and say, huh?  Money and money supply had nothing to do with the supply and demand of oil.  The same can be said of autos, wages, commodities, etc.  Inflation is always and forever a monetary policy output.

So what did the Fed really get wrong yesterday?  It wasn’t so much the increase in the Fed Funds rate from 2.2% to 2.455%, a 25-basis point increase, it was the language they used after that.

“The Committee judges that some further gradual increases in the target range for the federal funds rate will be consistent with sustained expansion of economic activity, strong labor market conditions, and inflation near the Committee’s symmetric 2 percent objective over the medium term.”-FOMC Statement

So not only did they raise the Fed Funds rate, they said that they would continue to do it going forward.  While this statement doesn’t mean that they have actually raised the rates in the future or even will raise the rates, it does indicate their intentions to eventually raise them again.  There is no reason to do this.  When Chairman Powell was asked at his press conference why they intended to increase rates when there are no signs of inflation, he struggled to communicate a good answer.  Again, not what the market wanted.

So why is the market wrong?  The market typically over responds to interest rate data as it is some indicator of what discount mechanism to use when valuing stocks.  If you use a discount rate of 5% versus 3%, the price you get for a stock, or a bond for that matter, will be wildly different.  Yesterday Chairman Powell effectively said, don’t look at the market rates of interest, look at what I say the interest rates are.  For a Fed Chairman that wants to be transparent, and keep markets focused on economic data, he did just the opposite.  He took a bullhorn out and said, “don’t mind those market rates, you should really listen to me.”  This was a big step backward in taking the Fed out of the market equation.

That being said, it is very rare that the machinations of the Fed make it to a business boardroom in evaluating business decisions.  It is highly unlikely that the board of Apple is sitting around saying, “gee the Fed raised rates so maybe we shouldn’t invent that new iPhone.”

The Fed decisions do, however, make it into portfolio decisions on a regular basis.  Portfolio managers need to evaluate the risk/return metrics of all their investment options.  Let’s just take a look at a few options and their yield characteristics:

The fixed income space is the least volatile because you are buying just the dividend, there is no potential for growth.  As we can see above, the most you can expect to get from this investment is 2.57% in dividends.  When we compare that to different alternatives, it pales in comparison with opportunities for stock growth.  Any long term investor should be excited about getting paid more than fixed income while investing in the long term potential of these stocks.

The US Large Cap is clearly the lowest dividend yield on this chart. Does that mean it is a bad investment or should decline in value further?  The answer is it really depends on earnings.  If earnings continue to grow anywhere close to what they have over the past several years, then the dividends will rise, and the stocks will eventually rise as well.

The current market sell off does not square with the current economic data.  Retail sales, which make up over 70% of the economy, continue to drive to record numbers.  The addition of Amazon to the marketplace has kept this growth from getting anywhere near inflationary.  Ask yourself if you paid more or less for that 65 inch LED TV, than you did the last time you bought a TV?

Oil prices have fallen to the mid $40’s per barrel, giving the entire country a tax cut.  It does not help the oil industry, but it is net positive for the economy.  There is some slowing in real estate, but that is more from a business perspective (wrong type of inventory) than from economic downturn.  And I could go on.

Our takeaway is this.  The Fed was wrong.  They may or may not admit this in the future, but it is not massively relevant.  The market is wrong.  It has fallen way too far, too fast to compensate for the Fed misstep.  We caution that the market can be wrong for a long time before it wakes up.  Downturns this fast can scare a lot of people.  As Mr. Buffet says, “it is times like these that stocks return to their rightful owners.”  It is times like these that we want to own cheap stocks.

As always, let us know if you have any questions.