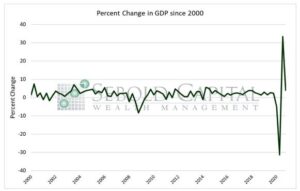 According to the Bureau of Economic Analysis’ advance estimate, real GDP increased by 4% in the last quarter of 2020, while nominal GDP grew by 6% to a level of $21.48 trillion. Real GDP growth for the third quarter was revised from 33.1% to 33.4%. However, real GDP ended up contracting by 3.5% in 2020, as the COVID-19 pandemic and the restrictions imposed on businesses and consumers to curtail the spread of the virus dealt a crushing blow to the U.S. economy.

Personal consumption expenditures, the largest component of GDP, increased by 2.5% from the previous quarter. Private domestic investment grew by 6.0% to $3.52 trillion. Government spending, the smallest contributor to GDP, increased by 0.4% over the same period. Net exports fell to a level of -$805.3 billion, a 9.4% change from the third quarter’s -$736.1, further increasing the trade deficit. Despite the economic rebound in the second half of 2020, it did nor manage to make up for the record-setting contractions of the first two quarters. As COVID-19 cases surged in the last quarter of the year, many of the restrictions were reimposed, which led to the first decline in employment since the onset of the pandemic and stifled economic growth. However, personal consumption and business investment picked up towards the latter half of the year, which somewhat softened the economic blow of the new restrictions. 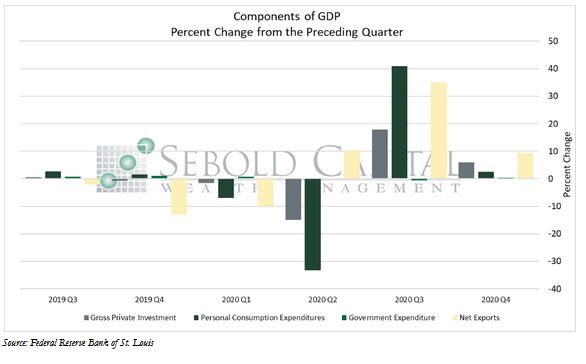