According to the Bureau of Economic Analysis’ advance estimate, GDP grew at a rate of 6.4% during the first quarter of 2021. The rollback of many restrictions imposed on businesses, increased government spending, and higher personal spending were the main drivers of growth this past quarter. However, gross private investment declined, and the country’s trade deficit grew larger in early 2021.

Personal consumption expenditures, which make up the largest component of GDP, increased by 10.7% in the first quarter of 2021. After two rounds of stimulus checks, consumers found themselves with additional income to spend. Likewise, many pandemic-related restrictions were rolled back earlier this year, making it easier for consumers to spend money at these establishments. However, consumption only increased 2.6% when adjusted for inflation, suggesting that a considerable portion of this increased spending can be attributed to consumers paying higher prices for the same goods.

Government spending, generally the smallest component of GDP, rose by 3.1%—the largest increase since 1984. Massive government spending, primarily driven by fiscal stimulus and pandemic relief. While business spending also increased last quarter, gross private domestic investment declined by 0.6%. One of the several concerns that arises from increased government spending is the crowding out effect, where rising public spending drives down or eliminates spending in the private sector. Government spending is expected to keep increasing throughout year, with several trillion-dollar spending bills already in the works, which will only add to the existing concerns.

Net exports declined last quarter to -$847.02 billion, widening the existing trade deficit by 5.4%. Exports by the United Sates fell by 1.1% in the midst of an imbalanced global economic recovery. Imports from foreign countries rose by 5.7% as American consumers continued to consumer goods from abroad. This is estimated to have hindered economic growth by as much as a 1%.

Overall, the economy expanded in the first quarter of the year as consumers found themselves with more disposable income and many businesses were allowed to operate with less restrictions. While the economy will probably continue to grow throughout 2021, the likelihood of it expanding at a similar rate is quite slim—unless we assume continued stimulus, which we do not. 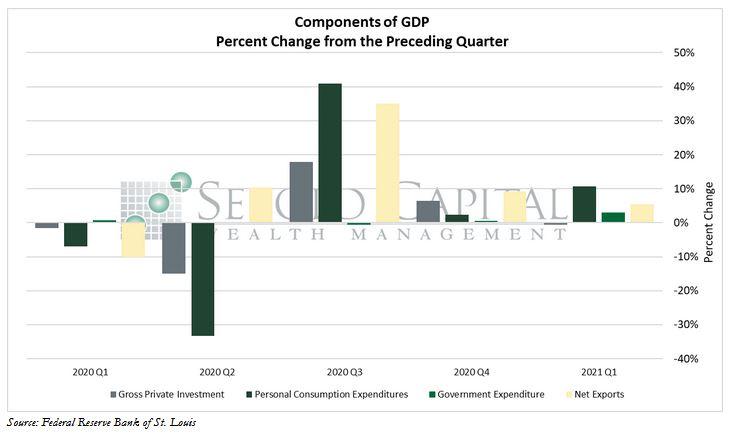