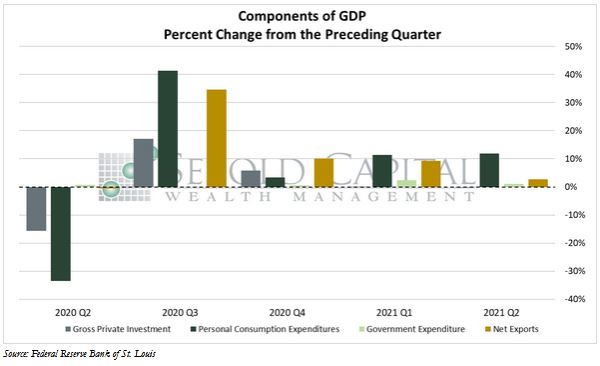 According to the Bureau of Economic Analysis’ advance estimate for Q2, GDP grew at an annualized rate of 6.5%. The figure came in well below market estimates, which hovered around 8.5%. Consumption continued to increase, as did nonresidential fixed investment, exports, and government spending. However, lower inventory and residential fixed investment, coupled with rising imports, moderated GDP growth.

Personal consumption expenditures, which make up the largest component of GDP, increased 2.8% from the previous quarter to $13.7 billion. This would mean an increase of 11.8% for 2021 when the figure is annualized. However, prices continue to rise at an alarming rate, which could severely dampen consumer spending. Prices rose at an annualized rate of 6.4%, while core prices surged to 6.1%. Nearly all measures for prices have been coming in above market estimates throughout the year, but this time around they completely dwarfed the forecasts. Economists were expecting PCE prices to rise 4.2%, while core prices were expected to increase by 2.9%.

Government spending, the smallest component of GDP under normal circumstances, rose 1.05% from the previous quarter to $4.02 trillion. While the quarter-over-quarter change was smaller than in Q1—and therefore drove the annualized rate down from 9.8% to 4.2%—government spending is likely to increase throughout the remainder of the year as there are a number of trillion-dollar spending bills in the works. Government spending does have a positive contribution to the GDP calculations; however, it can also lead to what is known as the “crowding out” effect. This happens when public spending suppresses or eliminates spending in the private sector, which in general is more beneficial for the economy.

The trade deficit widened last quarter, with net exports declining by 2.7% to -$895.9 trillion. The U.S. exported $2.45 trillion worth of goods and services while importing $3.35 trillion. The trade deficit would expand at an annualized rate of 11.2% according to last quarter’s results, bringing the country dangerously close to a $1 trillion deficit.

While at first glance an annual GDP growth rate of 6.5 % may seem exceptional, the report hides plenty of less-than-ideal scenarios. To conjure this growth rate into existence, the BEA assumed a GDP deflator of 6.1%. However, plenty of other inflation measures show prices rising much more than 6.1% for year. Even the CPI, which is known to understate the true extent of inflation, shows an annualized rise of 9.35%. Using that as a deflator yields real GDP growth of 3.25% for the year—half the current estimate. Growth is likely to slow down in the second half of the year, as supply-chain disruptions, labor shortages, a cooling housing market, and potential new pandemic-related restrictions are seen weighing on the economy— most forecasts are overly optimistic.