According to the Bureau of Economic Analysis’ advance estimate for Q3, GDP grew at an annualized rate of just 2.0%, compared to the estimated 6.7% from the previous quarter. While forecasters have been slashing their overly optimistic growth expectations—and bringing them back to reality—for some time, the official Q3 estimate still came in below market expectations of 2.7%. Consumption and nonresidential investment eased sharply, and net exports subtracted 1.14 percentage points from GDP growth.

Personal consumption expenditures, which make up the largest component of GDP, slowed down considerably during the third quarter, falling from 12.0% to 1.6% on annualized basis. It only rose 0.4% from the previous quarter. Spending on goods declined, led mainly by motor vehicles, as supply chain bottlenecks led to widespread shortages and prices continued to rise. Spending on services decelerated as consumers spent less on food services and accommodations—also under siege from price pressures and input shortages. The current labor shortage has also created additional challenges for both the services and manufacturing sectors, causing them to struggle to meet consumer demand.

Government spending, the smallest component of GDP under normal circumstances, rose by 1.5% from the previous quarter. This brought up the annualized rate to 6.2% from 3.9%, and it is only likely to increase given the continued push for trillion-dollar spending bills. On a more positive note, real gross private domestic investment was rose by 2.8%; it had been negative for the last two quarters. However, private nonresidential investment only rose by 0.4% and residential investment declined by 2.0%. The trade deficit continued to widen last quarter, with net exports falling from -$881.7 billion to -$939.5 billion. Exports of goods and services rose by 1.7%, while imports increased by 2.9%.

While 2.0% may be a perfectly acceptable growth rate for GDP in any given year, the fact that expectations declined from 6.7% should be somewhat alarming. This massive slowdown in real growth occurred even after reducing the deflator to 5.7% from the previous 6.2%. Plenty of other inflation measures exceed 5.7% when they are annualized, and using any one of these instead of the number the government has calculated would actually yield a contraction. The CPI, which is known to understate the true extent of inflation, shows an annualized gain of 6.3%. Using that as a deflator would yield real growth of just 1.4%. The PPI—an arguably more accurate measure of inflation—shows an annualized gain of 9.9%. Using that as a deflator yields a contraction of 2.2% in real terms. Price pressures will likely continue to weigh on economic growth, especially as other factors (such as supply chain disruptions and the possibility of higher taxes) also take a toll on consumer demand and domestic investment. 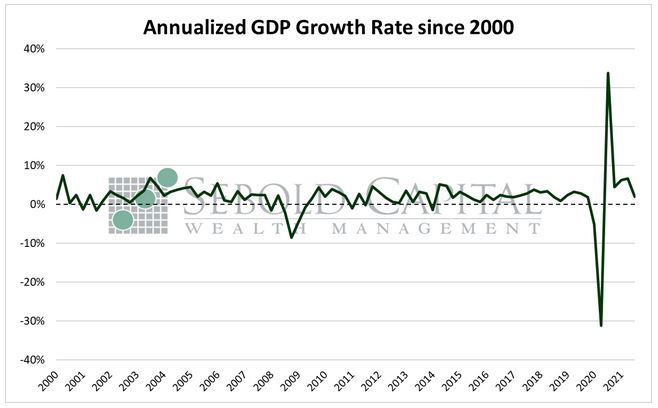 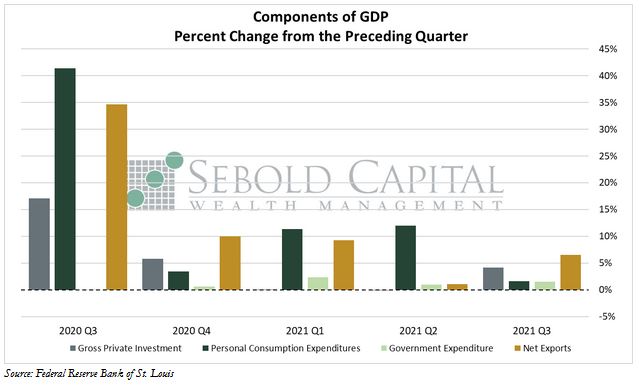