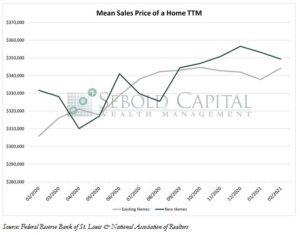 New home sales declined in all four census regions, falling by 37.5% in the Midwest, 16.4% in the West, 14.7% in the South, and 11.6% in the Northeast. Existing home sales followed a similar pattern, with sales declining by 5.4% in the South, 15.3% in the Midwest, and 12.3% in the Northeast. However, sales increased by 5.2% in the West—the only region that reported a gain from the previous month.

Home sales declined last month partly due to severe winter weather which prevented potential buyers from going out to look at houses. Mortgage rates are beginning to rise, which could also dissuade some potential home buyers. Home prices continue to raise as builders face inflationary pressure on materials and labor costs and as housing inventories remain restricted. The median price of a new home is 5.3% higher than it was a year ago, while the price of an existing home has surged by 12.6% over the same period. Even with higher prices and rising rates, housing demand will likely remain strong in the near future as many millennials reach their peak earning years and begin to settle down.