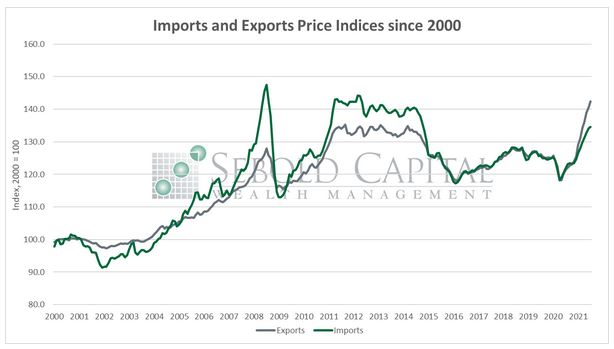 The import and export price indices measure changes in the prices of goods and services coming in and out of the United States. The data is used to deflate government trade statistics, predict future inflation and price changes, set fiscal and monetary policy, measure exchange rates, negotiate trade contracts, and identify specific industry and global trends. The indices are updated on a monthly basis and are provided by the Bureau of Labor Statistics’ (BLS).

In July, export prices rose by 1.3% to an index level of 142.4. Prices for imports advanced by 0.3%, with the corresponding index increasing to 134.6. Export prices have soared by 17.2% on a year-over-year basis, while import prices have surged 10.2% over the same period.

Prices for imports and exports continued to rise for the fifteenth consecutive month, dwarfing nearly every other commonly referenced measure of prices. Export prices came in considerably above market estimates, which expected a monthly increase of 0.9% and year-over-year rise of 16.7%. Export prices are on track to rise 22.9% in 2021, on an annualized basis. However, import prices appeared to ease slightly, and actually came in below forecasts. Nevertheless, import prices are on track to increase 13.7% for the year when the corresponding index is annualized.

Non-agricultural export prices advanced 1.6% for the month, driven by capital goods, industrial supplied and materials, automotive vehicles, and non-agricultural foods. Meanwhile, the cost of agricultural exports actually declined for the fist time in eleven months, with lower prices for soybeans, fruit, and corn offsetting higher prices for dairy products, nuts, vegetables, and cotton—resulting in a 1.7% drop.

Last month’s rise in import prices was mainly driven by higher import fuel costs, particularly oil and natural gas. Non-fuel import prices remained nearly unchanged, as lower costs for industrial supplies and materials offset higher prices for cars and consumer goods. Year-over-year import price inflation appears to have peaked in May, as the annual rate at which prices have risen has eased for two consecutive months.

Import and export prices likely provide a more accurate reflection of the actual extent of inflation in the U.S. If prices for goods and services exported by the U.S. increase, then it stands to reason that prices for goods that are produced and consumed domestically are at least rising at a similar—if not identical—rate. However, the slightly less dramatic rise in import prices has likely offset actual consumer inflation, given that domestic consumption is nowadays largely centered around imported goods. However, both price indices have outpaced the CPI by a significant margin, indicating that inflationary pressure continues to build up.