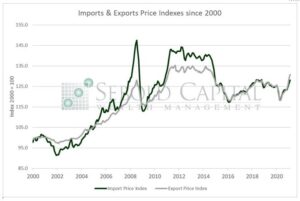 The import and export price indexes measure changes in the prices of goods and services coming in and out of the United States. The data is used to deflate government trade statistics, predict future inflation and price changes, set fiscal and monetary policy, measure exchange rates, negotiate trade contracts, and identify specific industry and global trends. The indexes are updated on a monthly basis and are provided by the Bureau of Labor Statistics’ (BLS).

Prices for both imports and exports continued to climb last month following an increase in January. Higher prices for imported fuel remained one of the main drivers of the index after surging by 11.1% in February and 9.0% in January. Import prices for industrial supplies, food and beverages, and vehicles also increased last month. Prices for agricultural exports, particularly corn and soybeans, were the main contributor to their respective index. Capital goods, consumer goods, nonagricultural supplies and materials, and vehicles likewise saw higher export prices in February. While the Fed insists that inflation is practically non-existent, prices are beginning to show signs of inflationary pressure after a considerable expansion of the money supply last year. Prices will likely continue to climb in the near future driven by record-low interest rates, massive fiscal stimulus, and higher demand as the economy fully reopens.