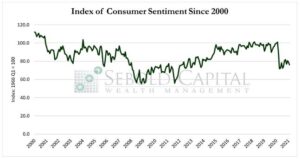 The US Index of Consumer Sentiment (ICS), as provided by the University of Michigan, tracks consumer sentiment in the US, based on surveys on random samples of US households. The index aids in measuring consumer sentiments in personal finances, business conditions, among other topics. Historically, the index displays pessimism in consumers’ confidence during recessionary periods, and increased consumer confidence in expansionary periods.

The Index of Consumer Sentiment declined for the second month in a row to a level of 76.2, down 2.8 points from January’s reading of 79.0. Consumer sentiment remains 24.8 points below last February’s reading of 101.0—one of the highest in the Index’s history—and 10 points below the long-run average of 86.2. Consumers’ inflation expectations remained unchanged from last month and currently sit at 2.7%. Professional forecasters increased their headline inflation expectations in February, from 2.0% to 2.5% as measured by the CPI and from 1.8% to 2.4% as measured by PCE, although their expectations remain slightly below consumers’ expectations.

Consumer sentiment declined this month, particularly among those with incomes below $75,000. Despite the likelihood of a large spending package, which potentially includes $1,400 stimulus checks, individuals view prospects for the economy less favorably than in the last few months. Stubbornly high unemployment, pandemic-related business restrictions, and a slow rollout of vaccinations have likely been responsible for depressing consumer confidence. Sentiment improved marginally among self-identified Democrats, rising from 89.5 to 89.9. However, consumer sentiment among Republicans fell from 69.9 to 63.7, continuing the downward trajectory it has had since the November election. Consumer sentiment among independents has also dwindled over the last few months, and it fell from 76.8 to 75.6 in February. Sentiment may stabilize as many of the restrictions are eased and the pace of vaccinations picks up, but higher food and fuel prices will remain a burden for consumers. 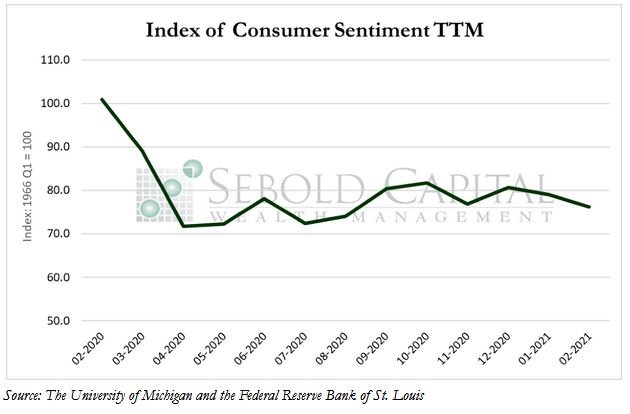