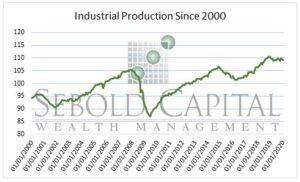 Total Industrial production has remained steady over the past twelve months. The TTM high occurred in January 2019 at 110.1 and reached its lowest points of the past 12 months in April and October of 2019 at 109.0. Mining gained 0.2%, while manufacturing decreased by -0.72% over the past year. Electric and Gas has varied greatly with a high in January of 123.8 and a low of 88.7 in April.  The Capacity utilization rate came in at 76.8% in January 2020. Utility production has also been trailing downward since January of 2019 with an average monthly decrease of -0.26%.

Both the manufacturing and mining industries have been relatively stable. Electric and gas has high variables of fluctuation, but this is common and consistent with this industry and its past trend. Manufactured goods will continue to flow through factories without a backup in production with a capacity utilization rate at 76.8%.  However, if the utilization rate begins to fall under 70%, prices will likely decrease as there is more capacity and less demand for the output produced, thus shrinking profit margins. 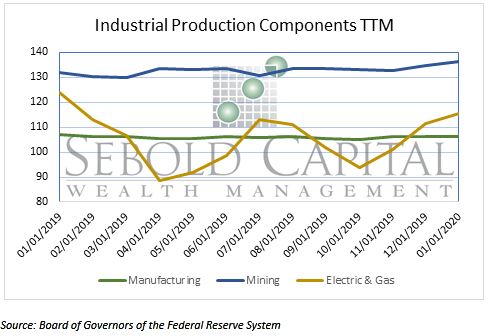