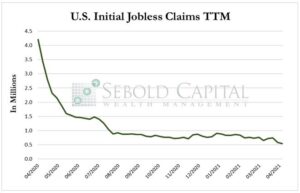 Last week, initial claims continued to decrease and reached another pandemic low, falling by 6.6% to 547,000. Continued unemployment claims also declined last week, tumbling by 0.92% to 3.67 million. The number of both initial and continued claims remain above their respective long-run averages of 372,000 and 2.81 million.

Initial claims declined for the second consecutive week, and currently sit at their lowest level since the pandemic started and the economy was first forced to shut down. Shortly thereafter, initial claims rose to an all-time high of 6.15 million as countless workers were either permanently or temporarily laid off. Claims have been (for the most part) steadily dropping ever since as the economy has recovered. Continuing unemployment claims—which represent individuals who have claimed unemployment benefits for two consecutive weeks or more—have likewise been decreasing over time. The figure had reported a small increase the prior week, but it has since been revised downwards. Unemployment claims are likely to keep falling as the economy continues to reopen and the extended benefits provided by the Federal Government—which could arguably be acting as a disincentive for some people to return to work—begin to expire. 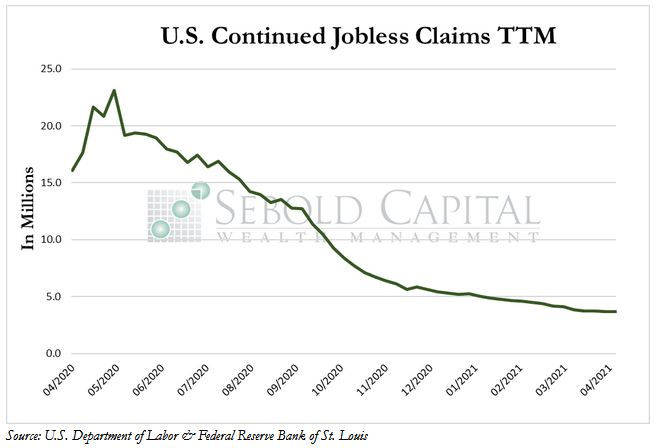