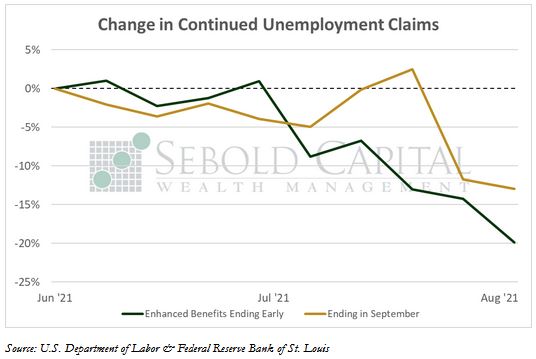 Last week, initial claims declined by 7.7% to 348,000, hitting another fresh pandemic low. Continued claims fell by 2.7%, also hitting a new pandemic low of 2.82 million. The number of initial claims in now below its long-term average of 372,000—the second time since early 2020 that is fallen below that benchmark—while the number of continued claims is almost equal to its long-run average of 2.81 million.

Initial claims declined last week for the fourth consecutive time, a sign that layoffs continue to ease as the economy continues to recover. Despite all the talk of the Delta variant, the labor market appears immune to its supposed economic effects. Continued unemployment claims also continued their downward trajectory, suggesting that more people are finding jobs and returning to work. The impact of the enhanced unemployment benefits on the labor market continues to be evidenced by the rate in which continued claims are declining in states that have opted out of the program compared to states that plan to continue the program until it expires next month. Continued claims have fallen by 19.9% since early June in states that have ended the program early, while they have only declined by 13.0% everywhere else. Jobless claims will likely continue to decline at a similar, or perhaps even a faster rate, once the government stops offering the $300 weekly payments at a nationwide level in September. Many individuals who were previously unemployed will have a greater incentive to find work once government benefits no longer replace such a substantial share of their income.