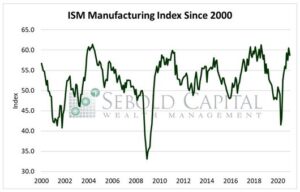 The Manufacturing PMI (formerly the ISM Manufacturing Index) is derived from a survey of purchasing managers and their outlook on overall conditions by looking at factors such as orders for durable goods, industrial production, and hiring. It gives a general direction rather than the specific strength of the factory sector and manufacturing activity in the U.S. A reading above 50 is an indicator that the manufacturing sector is growing while a reading below 50 indicates a contraction.

In January, the Manufacturing PMI decreased by 1.8 percentage points to a level of 58.7 from December’s reading of 60.5. As the index remains above 50, this marks the ninth month in a row in which the manufacturing sector, as well as the economy as a whole, has expanded after a contraction earlier last year. However, last month’ s drop in the index indicates that this expansion is occurring at a slightly slower rate. Out the six largest manufacturing industries surveyed, five reported growth in January, while petroleum and coal products contracted.

The Manufacturing Index is comprised of several sub-indexes that are all equally weighted when factored into the overall value of the Manufacturing Index. The indexes measuring the backlog of orders, employment, supplier deliveries, and imports showed moderate growth. Overall, new orders saw a considerable decline, with the New Orders index falling by 6.4 points and the New Export Orders index dropping by 4.8 points. All industries also reported significant increases in costs, with the respective index surging by 4.5 points. This is the second month in a row in which the Prices index increased substantially, suggesting that some inflationary pressure is starting to build up. The Petroleum & Coal products industry was one of the only two industries that reported a contraction last month, the other being Printing & Related Support Activities. The new administration has proven to be somewhat hostile towards the fossil fuel industry, promptly cancelling a significant pipeline project and promising to shift towards renewable energies, dealing a blow to the industry. Many respondents still report labor shortages, a trend that has been ongoing for a few months now. However, on a more positive note, Customers’ Inventories declined even further to a level of 33.1. This is generally considered to be a precursor of consumer demand and a likely sign of future economic expansion. 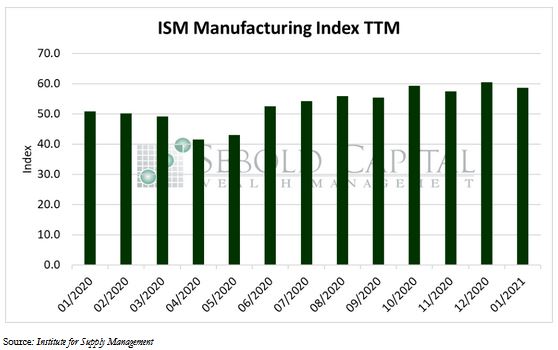